Innovation has long been a staple of the automotive industry, from the early 1900s when Henry Ford and his engineering team utilized vanadium steel to strengthen the Model T to today’s vehicles that integrate exotic metals and carbon fiber to provide added strength and improve weight savings.

Now, the drive to reduce vehicle weight to meet tougher fuel economy standards in the United States and other nations has the auto industry turning to a metal that nearly everyone has in a kitchen drawer or pantry. First developed in the mid-1800s, aluminum was used sparingly at first due to its high cost of production. In 1884, the largest single casting of the metal was used for the capstone of the Washington Monument.

For years, automakers and other industrial companies have used iron and steel to build engines, frames, bodies, and components. Steel production, however, is a highly energy-intensive process, which is one reason the recycling industry began to sprout in the late 1960s after being commonplace in wartime eras. 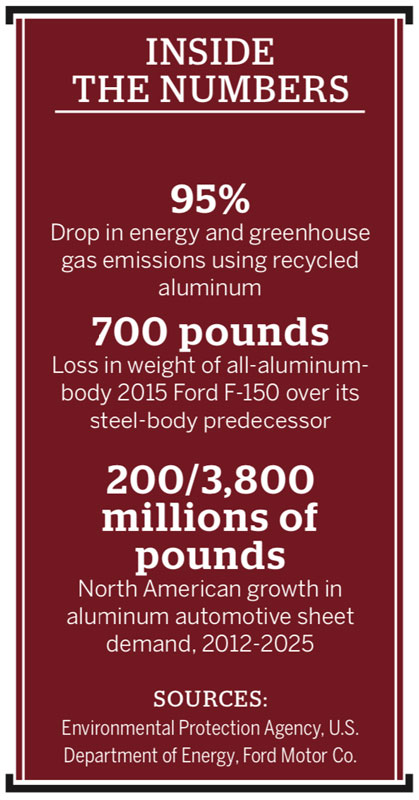 While the use of aluminum for manufactured goods has been steadily on the rise in recent years, mostly due to its low density and ability to resist corrosion, another factor emerged to drive demand and boost bottom lines: The Environmental Protection Agency estimates that secondary steel production made from recycled scrap uses 74 percent less energy than the production of virgin steel from iron ore and other metals.

Aluminum offers an even better track record. According to the U.S. Department of Energy, recycled aluminum requires 95 percent less energy and produces 95 percent fewer gas emissions over original production techniques. The result is that the metal, with its near-recyclable purity, offers a closed-loop bonanza for companies like Ford and its new all-aluminum-body F-150 pickup; the 2015 model is roughly 700 pounds lighter than the vehicle it replaced.

Combine that with a dedicated recovery effort inside Ford’s Dearborn Assembly Plant where the F-150 is produced, along with similar recycling programs operated by its OEM and industrial competitors, and you have a recycler’s dream: beginning to end the use of recycled aluminum that repeats itself over and over again.

The aluminum-recycling boom is propelling the bottom lines of companies like Atlanta-based Novelis, whose president and CEO is Phil Martens, who worked for Ford from 1987 to 2005 and last served as group vice president of product creation. The world’s largest recycler of aluminum, the company has had a field day reducing the carbon footprint of its operations and those of its customers, like Ford.

In fact, last September Novelis became the only metals company in the world to be accepted into the World Wildlife Fund Climate Savers program. Given the rising use of the low-density metal on production lines, aluminum body zero-emission vehicles will drive sustainability to ever-greater heights.

It’s not too early to cast an eye to the next governor in Michigan. During his first term, which began in 2011, Gov. Rick Snyder brought the state economy back from the brink of overspending and mismanagement. Today, the economy is growing, unemployment has fallen, and the budget is balanced.

Look for more economic gains through 2018, when Snyder’s second term is set to expire — propelled by the rebound of the automotive and manufacturing sectors. While more work needs to be done to diversify the state’s economy and improve education in the inner cities, Snyder’s successor will have the opportunity to advance a recovery built on sound fiscal management.

Of the six prospective candidates, Schuette and Hackel have proven to be effective leaders, as has Calley. Evans will have a hard time convincing voters he’s ready for higher office if a recovery of Wayne County fizzles. It’s the same for Duggan, who will see his first term expire in 2017. In a race between Schuette, Hackel, and Calley, the nod goes to Hackel for the very reason Snyder won — he polls well with voters and embraces strong fiscal management and limited government.

As work progresses on building a new bridge between Detroit and Windsor, the question remains: What to do with the Ambassador Bridge? The crossing, owned by Manuel “Matty” Moroun, was built in 1929 and is projected to last 100 years. But the outlook assumes the bridge will continue to provide for the transportation of trucks and passenger vehicles.

But what if the bridge was converted to rail traffic? Such a move would help Moroun overcome a projected 75 percent drop in vehicle traffic once a new bridge is built by Michigan and Ontario. It would also curtail the need to build a new rail tunnel below the Detroit River to draw more cargo traffic from Halifax and Montreal.

The opportunity to attract added freight holds promise for Detroit and Windsor. Right now, a great deal of cargo from overseas travels by rail from Canada through the Port Huron tunnel, and crosses Michigan before reaching Chicago for final shipment to the rest of the U.S. But if Moroun can convert his bridge to rail, such freight-forwarding services could be concentrated in the region, leading to new jobs and economic vitality.

By most assessments, the life span of the Ambassador Bridge could be extended considerably with the proper engineering. What’s more, rail companies like Canadian National, CSX, and Norfolk Southern would welcome the opportunity to route more traffic through Detroit, given the Port Huron tunnel is owned by Canadian Pacific. By converting the Ambassador Bridge to rail, and providing a new bridge for vehicle traffic, Michigan and Ontario would score a double economic bonanza.