Among children aged 1 to 14, drowning is the second leading cause of unintentional death, according to the Centers for Disease Control and Prevention in Atlanta. Goldfish Swim School, based in Birmingham, is working to improve that statistic by giving swimming lessons to nearly 70,000 children each week.

“For us, it’s about making lives safer so that these kids really have a love for the water rather than a fear,” says Jenny McCuiston, co-founder with her husband, Chris, of Goldfish Swim School.

The couple take safety seriously by training their employees in first aid, CPR, and in the use of Automated External Defibrillators or AEDs. They also encourage their staff to become certified as lifeguards.

Their research-based, year-round lessons incorporate songs, games, and monthly themed celebrations to help children from 4 months to 12 years old learn skills like floating on their back, developing grip strength to grab a wall, and climbing out of the pool correctly. Children also are taught the four strokes: breaststroke, butterfly, freestyle, and backstroke. 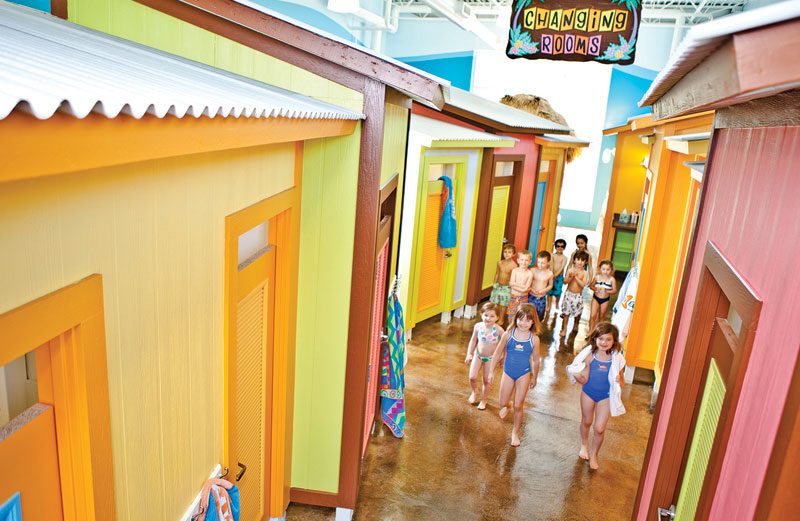 Inspired by their honeymoon in Hawaii, the McCuiston’s Goldfish facility creates a relaxing, beachy feel for kids, with 90-degree heated pools and tropical décor. They also try to make lessons fun.

It’s not all fun and games, “It’s a lot of hard work,” Chris says. “You’ve got the aspect of hiring, rewarding, training, and cultivating a workforce, but you’re also dealing with mom and dad, who are dropping off their prized possession. With all the different age groups and personalities that come with the kids that come in, it’s a very complex business.”

Before becoming a two-time Olympic Trials qualifier, Jenny remembers taking swim lessons as a kid in “a cold, dark atmosphere, and being a little bit scared to go sometimes.”

While attending the University of Arizona, she met a woman whose family owned a couple of swim schools and decided to create a better environment for future generations of swimmers. After graduating with a degree in early childhood development and family studies, Jenny was teaching swim lessons and concluded, after a waiting list started to form, that there was a real demand. After moving to Michigan, she started researching the idea of opening a swim school and realized hers would be an area first.

Before jumping in, Jennifer and Chris spent two years traveling the country to learn everything they could about the swim school industry and the best methods of teaching. In 2006, with no previous experience in managing a business, they opened their first location on Cole Street in Birmingham. Before they opened the doors, 510 people had pre-enrolled.

“I think early on we were like chickens with our heads cut off,” jokes Chris, who graduated from Michigan State University and was drafted to play baseball in the Detroit Tigers organization. “We were just running around and it was like whoever got it done just got it done, but we were very good early on, knowing that Jenny’s expertise was in the aquatics side, while I felt a lot more comfortable from a sales and business perspective. The community was excited about something that was focused purely on learning to swim and the safety aspects, rather than having it be part of a larger club.”

Goldfish opened its first franchise location in 2009. Chris says the toughest thing was documenting every facet of the business and creating a recipe so franchisees could replicate it and be successful.

Keeping pace with franchisees also brought challenges. “For Jenny and I it was an easy two-way communication because we’re just with each other all the time, but now you have franchisees that are separated from you. So the challenge becomes how we can communicate the best practices and expectations as we continue to grow together. You need your franchise owners to wear multiple hats – to deal  with an instructor while, at the same time, a parent might be upset and at the same time a child might be fearful of coming into their first swim lesson.”

With the opening of their 46th franchise and a planned expansion into Toronto, the couple keeps in close contact with each franchisee via communication technology and field staff visits throughout the year to ensure they’re delivering the same experience throughout each franchise.

Chris says one of the things he loves most is “seeing those success stories of people who came from something that they just really didn’t enjoy and love, like corporate America, and starting (a franchise) and building a healthy relationship among their family and friends.”

Moving forward, the McCusitons plan to have 60 franchises by 2018, but their “big, hairy, audacious goal,” or their “b-hag,” as they call it, is to have more than 250 locations in the next five years. They want people to think about swim lessons and immediately think of Goldfish.

“At the end of the day it’s really about us teaching quality swim lessons and teaching these kids how to be safe in the water,” Jenny says. “It doesn’t matter if they take these (skills) to be a competitive professional swimmer or not, it’s always a nice life skill to have to be able to swim for recreation and enjoy the water.”