Once French explorer Antoine de la Mothe Cadillac edged his canoe onto the banks of the Detroit River on July 24, 1701, it wasn’t long before industry gobbled up nearly every inch of the waterfront.

Up until the 1950s, citizens seeking the tranquility of our “strait” could access a handful of public docks, boat clubs, and sailing leagues, but for people of limited means the tributary might as well have been in outer space.

That all began to change in 2002, with the formation of the Detroit RiverFront Conservancy. The nonprofit organization, which is made up of business and civic leaders, began to acquire property to construct a 5.5-mile RiverWalk, along with parks, plazas, pavilions, and greenways.

Stretching from Gabriel Richard Park near Belle Isle to the Ambassador Bridge, the RiverWalk is nearing completion along its eastern span. So far, the finished sections of the waterfront, complemented by the Dequindre Cut — an old rail line that connects the RiverWalk to Gratiot Avenue (now a greenway) — have been unqualified winners.

The network of public access points allows anyone to enjoy the serenity of the river. What’s more, a wave of new residents, businesses, and retailers have moved into the area.

Now planners are working on the western span. Thanks to a series of major gifts, design work is underway on the 22-acre Ralph C. Wilson Jr. Centennial Park. Bounded by the river, Eighth Street, Jefferson Avenue, and Rosa Parks Boulevard, the park will be an oasis of public recreation.

“If you’re coming into the park from the east, you’ll be greeted by an epic playground where kids can climb a large bear and slide down on a log,” says Mark Wallace, president and CEO of the conservancy. “There will be beavers, fish, and other native species made of natural materials that kids can climb on and enjoy, plus a little creek where kids can splash around and dam off sections. There will be mud and sand, as well.” 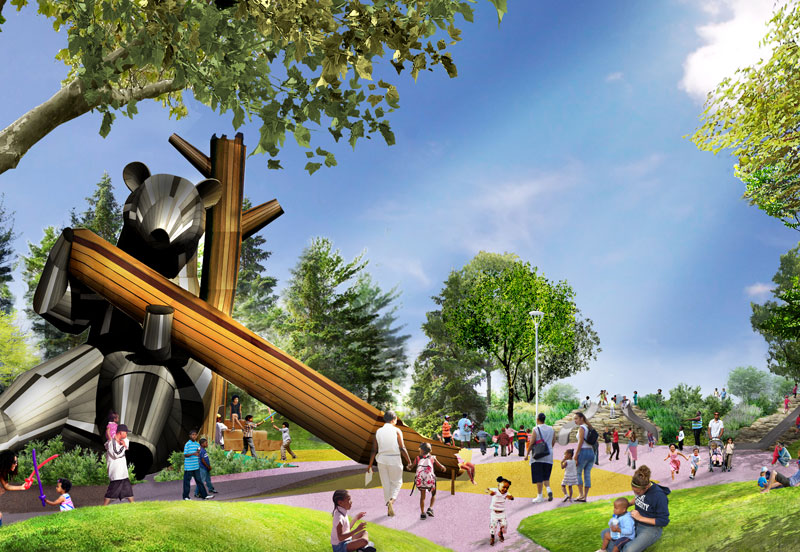 The park’s central area, to be called The Cove, will incorporate a major water feature, and contractors will break through a portion of the seawall to enhance the space. The western portion of the park will be anchored by the Sport House, an open-air structure for games and activities, and will feature trees, hills, and an area to watch movies and other family programming.

A planned path, the May Creek Greenway, will provide connections to Corktown, Mexicantown, Hubbard Richard, Millenium Park, and Briggs/North Corktown, along with Ford Motor Co.’s emerging hub of innovation for mobility at Michigan Central Station .

Rolling out in phases over the next three years, the improvements will link with the world’s first connected roadway for autonomous and connected vehicles. Planned mostly along Michigan Avenue, be-tween Detroit and Ann Arbor, the automated byway will supercharge a new digital ecosystem for residents, businesses, and visitors.

“With what’s going on along and near the river, you’re seeing Detroit become a model city for transforming industrial space into new uses,” says Joel Smith, president of Neumann/Smith Architecture in Southfield. “It’s the dawn of a new age.”