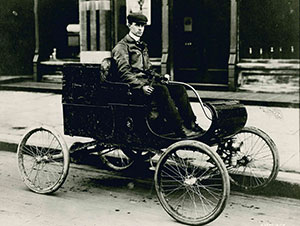 As Oldsmobile’s test driver, Roy D. Chapin had conquered high hills and other challenges, but on this journey he met a different obstacle: a hay wagon. His daring solo drive from Detroit to New York in 1901 came to a sudden halt when a pair of horses on the road in front of him balked and the farmer, who was driving the wagon, blustered.

Chapin, who was 21, tried to churn through an open field but broke the suspension on the  Olds. Yet, even with a delay for repairs, he still made it in time for the second-annual New York auto show.

“Arrived here at eleven in good order,” he wrote in a telegram. Chapin reckoned he’d traveled 820 miles in seven and a half days, averaging 14 miles per hour. His Olds curved-dash runabout consumed 30 gallons of gasoline and a prodigious 80 gallons of water. “No break. No trouble,” a subsequent advertisement blithely fudged. As good at marketing as engineering, Chapin’s boss, Ransom E. Olds, seized the moment to sign a contract for 1,000 cars with a New York dealer. The Olds name was on everybody’s lips.

“Probably no one benefited more … than Roy Chapin himself,” writes historian George S. May. Born in Lansing in 1880, Chapin was lured away from the University of Michigan by Olds with an offer of $35 per month. Chapin’s proficiency in photography was an asset in producing a catalog that showed inventories of cars and parts. Yes, Olds Motor Works in Detroit was a real manufacturer, not just a shareholders’ scheme. Chapin’s application to every other task, including test driving, led one company backer to predict he would “make a tip top strong man anywhere before he gets through.”

Indeed, by 1906, when he left Olds to launch the Thomas-Detroit car, Chapin was regarded as a “super salesman.” A National Cash Register Co. executive’s investment led the company to become Chalmers-Detroit in 1908, producing stately cars priced between $1,500 and $2,800.

Early in 1909, the Hudson Motor Car Co. set up shop in the former Aerocar factory at 6501 Mack Ave. (near Mt. Elliott), and scored an immediate hit with the Model 20 Roadster. Ad copy noted its sliding-gear transmission, “such as you find on the Packard, Peerless, Pierce, Lozier, and other high grade cars.”
Before long the company moved to a new factory, designed by architect Albert Kahn, at Jefferson and Conner. A six-cylinder model followed, and the line adopted an electric starter soon after Cadillac did (via inventor Charles Kettering). With more than 10,000 cars built in 1914, Hudson billed itself as “the world’s largest manufacturer of six-cylinder cars.”

As the company grew, Chapin cast his eyes afield. From his early experience driving the Olds over what Robert Conot calls “execrable cow paths and the towpath of the Erie Canal,” he understood the need for better roads. Starting in 1917, he served on national and international transportation committees, and his public service culminated in a seven-month duty as U.S. Secretary of Commerce (1932-33). He returned as Hudson president, staying until his sudden death three years later at age 55, when he contracted pneumonia after playing tennis with his friend, Edsel Ford. Of course, he had passed along the automotive gene: son Roy Jr. followed his footsteps, ultimately leading American Motors Corp., which formed when Hudson and Nash Motors merged in 1954.

Reflecting on his grandfather’s role as an industry pioneer, William R. Chapin, president of the Automotive Hall of Fame in Dearborn, mused on what might have been. “It’s an unknown story, and I don’t know what would have happened had he lived longer,” he says. db