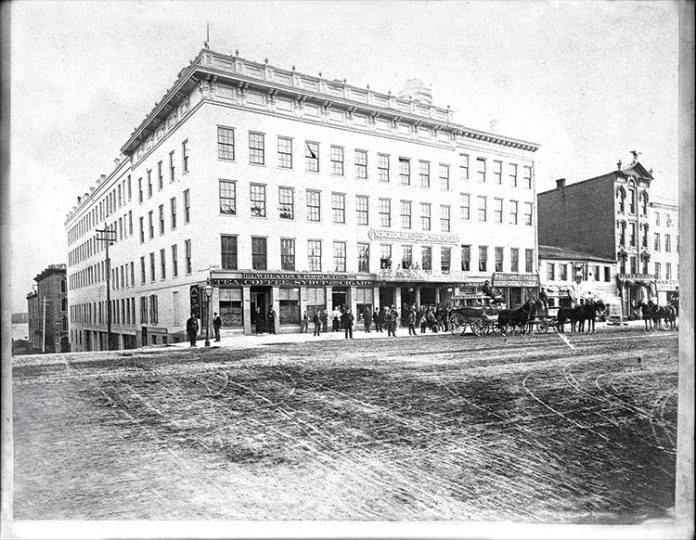 Daniel Webster’s arrival in July 1837 aroused a Detroit that had staggered through two cholera epidemics in the previous five years, a siege by the British during the War of 1812, and the horrific 1805 fire that all but consumed the town.

The Massachusetts senator, coming to visit his lawyer son, Daniel Fletcher Webster, stayed at the Michigan Exchange Hotel — at the time, the city’s most well-appointed lodge. About 1,500 residents swarmed to the establishment at the southwest corner of Jefferson Avenue and Shelby Street to demand a speech, which Webster delivered in Lewis Cass’s grove two blocks away.

Another visitor, the English writer Anna Jameson, was confined to her room — she doesn’t say where — because of “some deleterious properties” in the water. She regretted missing Webster’s visit and wrote, “He has been making public speeches here, appealing to the people against the money transactions of the government; and the whole city has been in a ferment.”

It was only natural that Webster and his family would choose the Michigan Exchange Hotel, which had opened on June 27, 1835. Its location well-suited travelers arriving by boat. (Jameson counted 42 vessels calling daily in port.) Rail passengers would eventually come, too.

Hotel guests walked about the city on plank sidewalks and Jameson, soon feeling well enough to ramble, observed, “In the principal street, called Jefferson Avenue, there are rows of large and handsome brick houses; the others are generally of wood, painted white, with bright green doors and windows.”

Eventually, there would be paved sidewalks and more brick buildings. Renovated in 1855, the Michigan Exchange accommodated a telegraph and a ticket office after 1873. An undated photo, possibly taken around 1880, shows a plain, light-colored, four-story building spreading across approximately 100 feet of Jefferson Avenue frontage.

One ground-level shop was occupied by Wheaton & Poppleton, sellers of tea, coffee, syrup, and cigars. To the other side of the hotel’s grand entrance was a pharmacy. Counting the windows in the rear addition suggests the hotel had 100 to 125 rooms.

The Michigan Exchange was one of 40 hotels then operating in Detroit. A business directory in 1875 listed them all, from Ackerman House to Union Hotel. Biddle House, on Woodbridge Street, was named for Maj. John Biddle, who became United States Registrar and later an important banker. Behind Biddle House, Detroit’s largest assembly hall “seated 1,500 persons and produced a good revenue until larger halls and opera houses were built,” wrote historian George B. Catlin.

The National Hotel, occupying a frame building with a narrow frontage at the corner of Woodward Avenue and Cadillac Square, was enhanced by a 2,625-square-foot brick addition in 1851. During the next year, the Fourth United States Infantry was stationed in Detroit.

Ulysses S. Grant and his wife, Julia, checked into the National before renting a house. Capt. and Mrs. Grant joined the finest society — the so-called 400, led by Great Lakes shipping barons and copper kings — and attended weekly balls held at the Michigan Exchange. As Catlin recorded, “The captain did not dance, but stood around looking bored while other officers led Mrs. Grant through the cotillion.”

Further indicating the hotel’s importance, the Mercantile Society met there, and the Detroit Board of Trade’s first office was in a space to the rear. New ownership in 1882 couldn’t provide long-term revitalization, especially as the advent of steel-framed buildings made larger hotels feasible. The Michigan Exchange was demolished in 1891, leaving a legacy as an economic catalyst for greater days ahead.