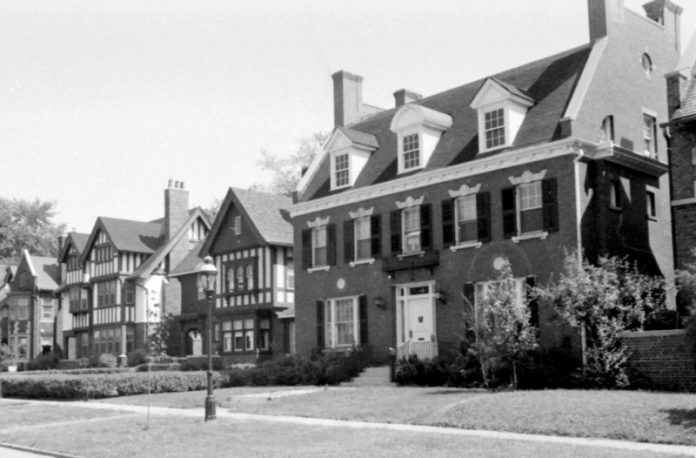 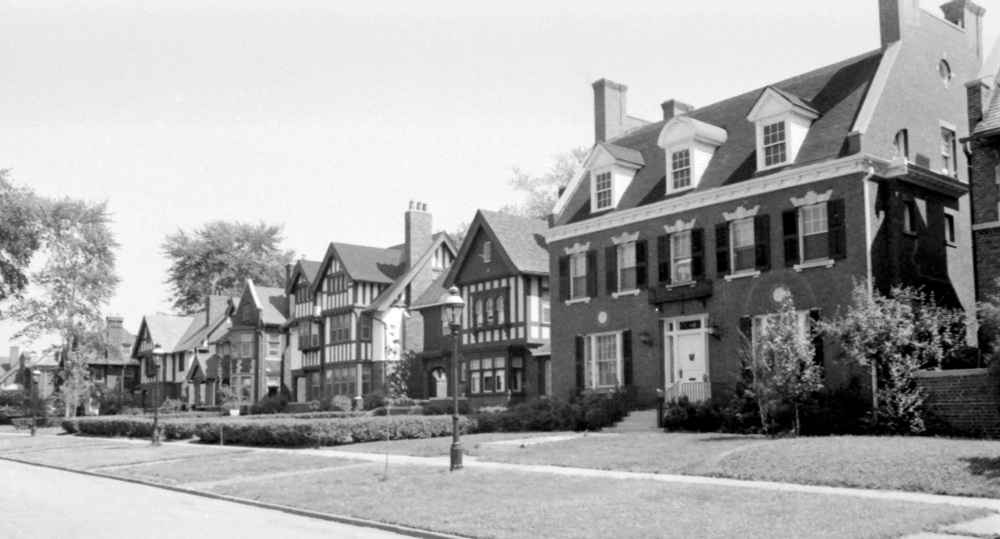 Like many who built in Indian Village, John F. Dodge commissioned Pewabic tiles for a new house on Iroquois Street. The 1917 order, a wedding present for his daughter, adorned the entertainment room and specific tiles depicted popular amusements: cards, checkers, chess, dance, and darts. Yes, there was plenty of dancing room for the newlyweds in the 11,583-square-foot residence.

While the popularity of Pewabic tiles was a constant, the neighborhood’s many architectural flavors made Indian Village unique. The eastern Detroit enclave has more than 350 homes in styles from Arts and Crafts to Tudor Revival. They were large homes on large lots: Dodge’s property consisted of more than a half-acre. It was no surprise that some of Detroit’s best-known people became denizens.

The story of Indian Village goes back to original grants of French ribbon farms extending inland from the Detroit River. Water access shaped the parcels. Gabriel St. Aubin and Francois Rivard tended the soil here until Abraham Cook enticed them to sell over a stretch of time.

Cook and his family held the land through the blooming heyday of horse racing; around 1850, they built a mile-long oval track first known as the Hamtramck Race Course, then as the Detroit Club Course. The public attraction drew large crowds eager for excitement.

By 1893, though, Cook’s heirs developed a “first-class residential district on a generous scale,” according to the Detroit Historical Society. Iroquois and Seminole avenues, named for famous racehorses, provided inspiration for the district’s moniker. Burns Avenue is the third pillar in the Village, which is bounded east and west by Jefferson and Mack avenues.

The first residence went up in 1895 for Dr. Theodore McGraw and his son-in-law, Clarence Lightner, who became a University of Michigan regent.

Eventually, there were neighbors. Through her family connections, Ellen Winifred Scripps represented the publishing industry. James Scripps, founder of The Detroit News and an avid genealogist, wrote that Winifred married Griffith Ellis and “devoted herself to music and for a number of years has held the position of soprano singer in the choir of the First Presbyterian Church of Detroit.”

Besides Dodge, auto industry homesteaders included Edsel Ford and Henry Leland. The latter, known as the Master of Precision, took Henry Ford’s second car company and turned it into Cadillac Automobile Co. in 1902. When Henry Ford’s third company proved successful, he and his son had some measure of retribution when they acquired Leland’s Lincoln Motor Co. in 1922.

Detroit’s thirst for imbibing contributed to the construction of homes for Bernard Stroh, Fritz Goebel, and Hiram Walker II. The latter whipped up eight bedrooms of masterful Arts and Crafts on Burns Avenue.

Others brought gentility to the environs. Dr. James Burgess Book was a surgeon educated in Toronto and London. He gained renown for an 1882 operation, performed before students and faculty of the Michigan College of Medicine, to remove a patient’s Meckels ganglion, the nasal nerve tissues. “Socially agreeable, frank and candid in his manner, he makes friends easily, and retains their esteem,” remarked his contemporary, historian Silas Farmer.

Book charged architect Louis Kamper to duplicate a neoclassical chateau from the grounds of the Palace of Versailles. Kamper enjoyed the favoritism of Book and his brothers, Frank and Herbert. The three developed Washington Boulevard’s “Fifth Avenue of the West,” erecting the Book Tower, Book Cadillac Hotel, and Industrial Building from Kamper’s designs.

Remaining vibrant and continuing to attract big names, the neighborhood saw the restoration of its original streetlights in 2015. Its annual home, garden, and holiday tours entice more than 30,000 visitors to partake of residential splendor and heritage to defy the ages.