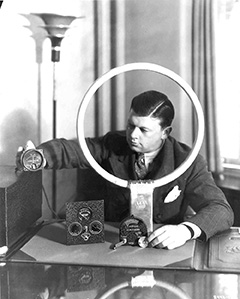 Bill Lear probably foresaw the automobile as the rolling platform for infotainment and communications it has become. The electronics- and aviation-industry genius who twice failed to graduate from high school — both times he was kicked out “for showing up teachers” — had an eye for trends and an appetite for risk. His ideas resulted in the building of several large corporations, and one survey rates him among the world’s 100 most influential inventors. In guiding the marriage of radio and automobile more than 80 years ago, Lear forever eliminated the necessity of singing “Ninety-nine Bottles of Beer on the Wall” as highway entertainment.

A self-taught engineer and admirer of the famed inventor Nicola Tesla, Lear came of age during World War I and afterward stood at the vanguard in the exciting new realm of commercial radio. Lear co-founded Quincy Radio Labs and, as a sideline, helped to get a local broadcast station on the air. A high school student named Elmer Wavering worked for Lear, and the pair began a collaboration that would result in making travel more pleasurable for millions of motorists. “By tinkering and absorbing engineering on his own, Mr. Wavering worked with Mr. Lear and built a car radio that could withstand the rigors of bumpy roads and severe climate changes,” The New York Times said in tribute to Wavering in his 1998 obituary.

According to one account, the partners — who couldn’t afford paying for a display booth at a Chicago Auto Show — set up outside the convention hall and played their car radio loud enough for passers-by to hear. In addition to securing some orders, they drew the attention of Paul Galvin, president of Galvin Manufacturing Co. A production deal was agreed upon in 1930 and the name Motorola was created, appending the first part of “motor car” and the last part of “Victrola.” The Ford Model A was an obvious destination for the Motorola unit, although at $130, the radio cost 24 percent of the car’s $540 purchase price.

Despite competing against existing brands like Transitone, Roamer, Bosch’s Motor Car Receiver 80, and Delco’s Model 3026, Galvin Manufacturing met with such success that it changed its own name to Motorola. Wavering stayed with the company, eventually running it. In the 1950s he led an engineering team that created the automotive alternator and displaced the generator, which produced little voltage when a car’s engine idled. Because an alternator issues a constant stream of power, the automakers were able to add accessories such as air conditioning, electric windows, and motorized seats.

Meanwhile, by relinquishing his patent, Lear funded his own development company. He also purchased his first airplane, for $2,500, from a woman from Dearborn. Fascinated by the problems of aeronautical navigation, he reeled off dozens of his lifetime’s 110 patents by focusing on the area of instrumented flight. Advances in navigational aids followed, culminating in his work on autopilot capability while aloft and automatic (blind) landings in all conditions.

Lear’s next breakthrough was the mass-produced business Learjet, first flown in 1963. As a premium amenity for his plane, Lear helped spearhead the development of the stereo eight-track player along with Ampex Magnetic Tape Co., RCA Records, Motorola, and others. Recognizing a winner, Ford Motor Co. picked up the stereo tape as an option for 1966. Priced at $128.49 in the Mustang, the player almost exactly mirrored the Motorola radio’s price from two generations earlier.

Throughout his life, Lear stayed a step ahead, but he couldn’t convince everyone to follow his lead. With his technical brilliance, he developed a closed-circuit steam turbine in which one of the key fluids was called Learium. He tried earnestly to interest the automakers, but the engine was limited to a few test models. While he failed to make a dent in automotive propulsion, he was able to play and fly among the stars. db