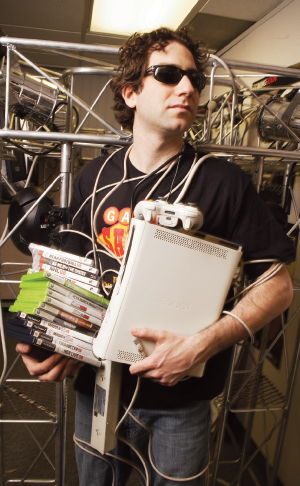 After raising seed money from local investors, Gabe Rubin set out to prove that revenue could be generated from video gamers eager to compete for money over the Internet. Offering secure payment options, Rubin’s Gamersaloon.com brokers tournaments in return for a 12-percent cut of the pot. And it doesn’t matter if one player lives in London and another resides in San Francisco.

“There are around 50 million households in the United States that have game consoles, and many more around the world, so the market for skill-based gaming sites is there,” says Rubin, 28, CEO of Southfield-based Beyond Gaming. Since late 2006, Rubin has grown the business from a three-person shop in his basement (eventually there were 20 employees working from his home) before moving to a formal office.

Rubin isn’t alone in a burgeoning industry that some say brushes up against the limits of federal law, but doesn’t invite scrutiny. Because gaming sites like Gamersaloon.com, Worldgaming.com, and Sharkwaters.com are viewed as skill-based games, they’re not considered gaming sites, which the federal government prohibits. But there’s a caveat: By law, only people 18 years or older may win money on such sites.

In turn, eight states, including Maryland, Arizona, and Vermont, either ban or limit skill-based competition over the Internet; Michigan allows it. “We’ve already seen users compete among themselves for combined prizes of around $1 million,” Rubin says. “As more new and enhanced games like Halo 3 and Madden NFL 08 are introduced, it’ll drive demand for the entire industry.”

To generate traffic at his Web site — close to 55,000 players have registered, to date — Rubin uses a few tricks gleaned from those pinball machines of yesteryear where winners are posted for everyone to see. In turn, he’ll soon introduce a social network on the site, as well as advertising banners.

He’s also made sure to provide plenty of safety measures. For example, once competitors agree to a challenge, their money is placed in a neutral pot. After a winner emerges, and the players agree on the victory, the payoff is made. As for other safeguards, players with three or more disputes are not allowed to compete on the site.

“We’re on track to reach profitability later this year,” Rubin adds. “Our goal is to revolutionize the industry.”