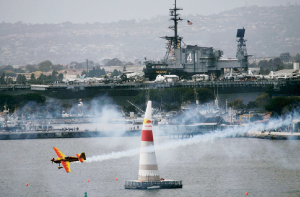 A vast array of luxury suites, corporate chalets, and private parties will be on full display this summer as the Motor City gears up for what could be a record year in entertainment above, along, and near the Detroit River.

Among the offerings is the recently lured 2008 Red Bull Air Races, which will scorch the Detroit skyline when it soars into town May 31 and June 1 for the third stop on its international World Series tour.

Renowned for their agile and acrobatic aircraft performing “snap rolls” and “knife edges” at breakneck speeds (over 260 mph), 12 of the world’s finest stunt pilots will battle for the air race crown.

The event, the first in the Midwest, will feature one plane after another negotiating a low-lying slalom course composed of inflatable pylons, or “air gates,” on the Detroit River. Their goal: to rack up points — and avoid losing them — all while racing against the clock.

“Everyone knows you can’t waste time out there and win,” says 2006 American champion Kirby Chambliss, explaining the effects of wind, temperature, and tides on the race’s aerial pathways. “It’s a living, breathing track; it’s not a piece of pavement to stay on. But the planes are strong, fast, slippery — and very cool to watch.”

Combined with the Gold Cup Hydroplane Races (July 11-13), and a return engagement of the Detroit Belle Isle Grand Prix (Aug. 29-31), more than 1 million spectators are expected to converge on the Detroit riverfront for these and other summer activities, generating more than $200 million in economic activity.

Other events include the annual Freedom Festival Fireworks sponsored by Target Corp., scheduled for June 23; the “Rockin’ on the Riverfront” concert series behind the Renaissance Center, hosted by General Motors Corp.; and a series of festivals at Hart Plaza and Campus Martius Park, culminating with the Detroit International Jazz Festival over Labor Day weekend.

The air races, though, may be the premier event. “It’s a brand-new, high-impact sport,” says Jon Rimanelli, CEO of Detroit Air Racing, whose tireless efforts to woo Red Bull personnel and win over local officials made the race possible. “I think Detroit is in a prime position to capture new business in this area,” he says, “and my goal is to grow this sport long-term.”

The fourth season of the Red Bull Air Races World Series, which took off on April 10 (in Abu Dhabi, UAE) and will touch down for its final race on Nov. 2 (in Perth, Australia), will cruise through 10 cities in nine countries. San Diego hosts the other American round May 3-4.

Part of Rimanelli’s mission for the race is to promote the legacy of its partner, the Tuskegee Airmen, an organization dedicated to World War II’s African-American pilots. “One way we propose to do this,” he says, “is by re-opening a seaplane base at the Detroit Yacht Club on Belle Isle with a memorial.”

Aside from high-octane motor sports, outdoor enthusiasts have plenty of other events to choose from this summer. The first-ever Match Race for the Detroit Cup gets under way on Lake St. Clair May 8-11; GM’s River Days take place along the waterfront near the Renaissance Center June 20-23; Detroit’s Electronic Music Festival runs from May 24-26; and the 84th annual Port Huron to Mackinac race sets sail on July 12.