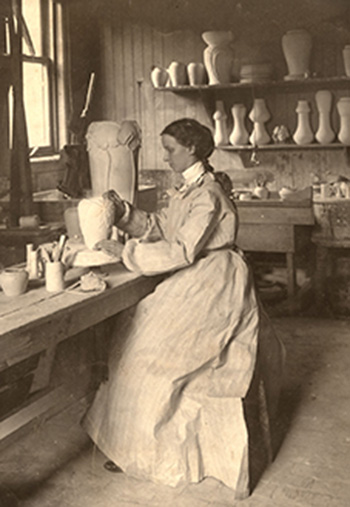 The bid proposal was an hour from closing when Mary Chase Perry heard of the opportunity to furnish luminous tiles for the Cathedral Church of St. Paul along Woodward Avenue, south of Warren, in Detroit’s Midtown district. Securing the job at the Gothic Revival sanctuary, which was built in 1908 to serve as the cathedral church of the Episcopal Diocese of Michigan, would allow Perry to showcase her alluring new style of ceramics.

In short order, she whipped up a proposal, won the job, and created tiles aglow with shades of blue, ivory, and brown. “When we surveyed the completed task, we felt what I trust was a pardonable satisfaction,” Perry wrote later.

St. Paul’s proved to be a strategic client of Pewabic Pottery, the fledgling enterprise that got its start in 1903 (the name came from the Upper Peninsula copper mine near Hancock where Perry was born). Not long before the St. Paul’s commission, she moved the business from Alfred Street in Detroit’s Brush Park neighborhood to a new Tudor residence designed by William Stratton that faced Water Works Park at 10125 East Jefferson Ave. In 1918, after what his distant relative Doug Stratton calls “probably one of the longest courtships in history,” the architect and potter wed.

Mary Chase Perry Stratton blazed a singular artistry while sustaining a successful business. From the newfangled, electrically driven potter’s wheel she preferred to her German-born assistant’s antiquated kick wheel, there sprang ceramic vessels acclaimed for the use of clean lines and natural ornamental themes. Business partner Horace Caulkins’ electric Revelation kilns were “on an entirely new principle,” she said. Experiments with minerals in glazes achieved the “subtle and elusive” coloration that typifies Pewabic.

Described variously as opalescent, iridescent, luminous, and radiant, Stratton’s vessels and tiles used matted colors that subtly released their luster to the light. “Indeed, there really seems no limit to the tones and overtones she can produce,” critic Helen Plumb wrote in 1911. As the Arts & Crafts style became popular, demand grew for the output from Stratton’s wheel and press, and Caulkins’ kilns. In manor homes from Boston to California, designers used Pewabic tiles to decorate bathrooms, foyers, and hearths. The studio’s staff of six workers fulfilled medium and large commissions on projects ranging from the foyer of an opera house in Bay City to the sensational state capitol building in Lincoln, Neb.

Especially popular in Michigan, Pewabic ware can be found in the Detroit Public Library, the Women’s City Club, Stroh Brewery, the Detroit Institute of Arts, the Fisher Building, schools, churches, and homes. Belle Isle’s Scott Fountain has Pewabic inlays, while nearby Indian Village boasts a concentration of residences adorned with Pewabic tiles. (Some can be seen June 7 during the Historic Indian Village Detroit Home and Garden Tour.)

Worse times followed. The Strattons had to sell their Grosse Pointe Park home in 1937, and the following year, Mary — who had suffered through the murder of her beloved father when she was young — lost her husband as a result of a streetcar accident. Afterward, she moved into a modest residence behind her studio, working nearly to the end of her 94 years. Among Stratton’s final projects before her death in 1961 was the Kirk in the Hills church in Bloomfield Hills.

Although production of Pewabic tiles ceased in 1965, the business was revived 17 years later following the creation of the nonprofit Pewabic Society. Today, the Stratton Foundation in Birmingham supports the Pewabic Society and the College for Creative Studies, which evolved from the art school the Strattons had helped to create in Brush Park through their work with the Detroit Arts & Crafts Society. And Pewabic’s legacy is ever-expanding. As Charles Freer, the collector, once said, “Hundreds of years from now the name of your motor cars and drug factories may be forgotten, but people will know that Pewabic Pottery was made in Detroit because this beauty will live.” db