There aren’t many products so fabulous that it’s necessary to utter their name three times, but Alexandra Clark, founding chocolatier and president of Bon Bon Bon in Hamtramck, hopes to create a worthy experience.

The chocolate shop, which has adopted the French phrase for “good good good” as its name, was founded in 2014 and has since expanded to include locations in downtown Detroit and Midtown. “It is sincerely the best chocolate we can possibly make with what we have,” Clark says.

Cacao grows 20 degrees north and south of the equator, and Bon Bon Bon, Clark explains, sources chocolate made with the highest quality cacao possible from plants pampered in carefully maintained environments. Third-party companies check out ingredients on behalf of the company.

Each chocolate at Bon Bon Bon is the same size and shape; the flavors make them special. The offerings have included Crème Brulee; Bumpy, based on bumpy cake; Killer Cereal, made with Fruity Pebbles; and PB & Jam, a peanut butter and jelly sandwich in chocolate form.

There are also seasonal options; at Thanksgiving, a sweet potato casserole flavor was offered, while caprese is often available in early fall, when fresh tomatoes are abundant. Clark says she can get away with offering unusual flavors because customers only risk a couple of  bites and $3.50 for each selection. 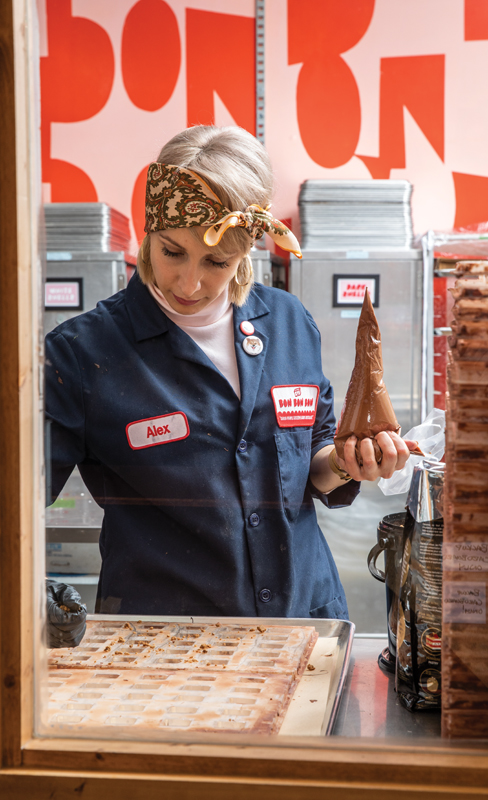 Some flavors, she admits, are truly unusual: The confectionary once offered a grasshopper-flavored chocolate that included the ground insect. Clark says the bug is an excellent source of protein, and added a nutty flavor. The company is careful to research and disclose all allergy information — people with shellfish allergies are also allergic to grasshoppers, Clark says.

Every chocolate must be both delicious and accurate, she adds, resulting in both a traditional and unique experience. She and her employees keep a running list of flavor ideas that never seems to end. “I think that’ll be the day that it’s over,” Clark says of the day they get through the list. “I don’t think that day will ever come.”

Bon Bon Bon has a team of 35 people, including Clark, who says her workforce and products reflect the diversity of Hamtramck. “It’s both familiar and unfamiliar,” she says of the chocolate.

Clark says she wanted to add a Midwestern practicality to her products, so the packaging is recyclable, and every chocolate is individually wrapped. She wants to make sure opening each chocolate is like opening a present.

Despite a no-nonsense attitude, Clark says the chocolatiers’ work is somewhere between that of a bartender and a jeweler. The counters, glass cases, and socializing over handmade specialty items make buying chocolate more special than grabbing a beer, but less costly than purchasing jewelry. At the three retail locations, Clark and her employees see a lot of first dates, business outings, and friends meeting up.

Adwity Borna, one of the company’s head chocolatiers, says she hasn’t had a bad experience with customers; everyone who comes in loves chocolate. “It’s really so good to see their joy,” she says.

Before Clark’s chocolate obsession kicked in, she wanted to make ice cream. Her life changed when she visited a chocolate shop in the Netherlands and had what she described as a “complete emotional breakdown” over the use of chocolate as a medium.

She asked everyone she knew how to get involved in the chocolate industry and started researching. She earned a degree in hospitality business, food science from Michigan State University in East Lansing, and worked for the Partnerships for Food Industry Development program at the U.S. Agency for International Development.

Clark planned on living on a cacao farm in Grenada as part of her academic research, but had to cancel her trip when she got into a car accident in Chicago after leaving an industry show in 2009. While recovering, she attended the French Pastry School of Chicago before returning to MSU to conduct research.

In 2010, Clark attended Massey University in New Zealand to study agricultural commerce. In 2013, she returned to the U.S. to continue her pastry studies, serve an internship, and work before opening Bon Bon Bon in 2014.

Clark used money from her car accident to rent a space in the back of a Coney Island in Hamtramck, across the street from her former roommate’s grandfather’s house. She didn’t look the space over before signing the lease because she wanted to get rid of what she saw as “dirty money.” “I just had to see if my ideas would work,” she says.

Despite the run-down location, four months after opening, Martha Stewart Living Magazine published an article about Bon Bon Bon. The company only sold chocolates in bulk for events at the time, but people were knocking on the door asking for more.

A while later, a woman helped Clark find a 400-square-foot space in downtown Detroit where Clark manufactured her products during the week and opened a storefront on Saturdays. The headquarters in Hamtramck, meanwhile, was acquired in February 2016. The company moved into the 6,000-square-foot space in 2017.

Clark likes making waves in an industry she says is antiquated and controversial; while other chocolate companies fight over whose grandmother’s caramel recipe is the oldest, Bon Bon Bon cut nearly all waste from its manufacturing operation and is careful not to source chocolate made with cacao grown on farms that use child labor, a common practice in the industry.

She says the cacao used to make her chocolates requires a high level of care, where growth and harvesting don’t exhaust the soil, and are good for the plants and the environment.

Clark says she doesn’t want Bon Bon Bon to be like a box of chocolates, in which the piece you choose is a mystery. Practicality and confidence in purchases are as important to her as quality. “Why don’t you just label your chocolate?” she says of standard chocolate manufacturers.