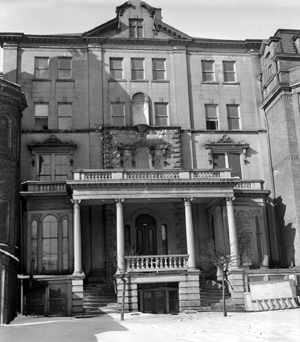 Capt. Eber Brock Ward and his partners were looking at the big picture when they organized the Eureka Iron Company in 1853. To get their ironmaking operation started, they purchased the Maj. John Biddle estate, downriver from Detroit — a 2,200-acre tract — for $44,000. Besides an ironworks, their plan encompassed the creation of the village of Wyandotte. Soon after, a rolling mill was added to the original furnace and smelter. One historian writes that in 1856, with the first fiery blast to transform iron ore, “Wyandotte became conscious of its place in the world of industry.”

The furnace initially issued 10 tons of iron per day. Before long, improvements and modifications raised the daily output to 60 tons. Capt. Ward added a second furnace in 1863; his investment reportedly was repaid within a year. Wagonloads of charcoal from the neighborhood kilns were seen rolling down Eureka Road daily — nearly 2 million bushels annually. The following year, Capt. Ward entertained the inventor William Kelly, who independently created a corollary of the Bessemer process patented in England a few years earlier. Infusing oxygen into molten iron removed impurities, so harder and stronger steel was inexpensively produced. The net gain: Eureka Iron became the first U.S. steel producer using the Kelly converter.

It was yet another success for Capt. Ward, whose lifelong Midas touch extended from shipping to the plate glass industry, and from silver mining on a small Lake Superior island to corn production on 5,000 acres of Iowa cropland. When he came to Detroit in 1850, he was already worth some $250,000. And even as his well-established line of Great Lakes steamers grew, he foresaw that their popularity would soon give way to the Iron Horse.

Embracing diversification, Capt. Ward saw Detroit as the natural point for processing the riches of Michigan’s forests and mines. With other prominent men, he promoted the creation of the Soo Locks in order to connect lakes Superior and Huron, thereby opening the Upper Peninsula to development. He ultimately became president of the Flint and Pere Marquette Railroad, which by virtue of a government land grant extended from Toledo to Ludington on Lake Michigan, where he happened to own a large and valuable pine forest.

Prosper as he inevitably did, in 1860 Capt. Ward built what The Detroit Tribune called “one of the finest mansions” in the Northeast. Located on Fort Street, the structure of Illinois marble stood on a 250-by-500-foot corner lot that also accommodated a dozen greenhouses and innumerable grapevines. “He raised many tons of grapes every year, and it was his custom to store (the fruit) away in an ice-house built especially for this purpose, a full winter’s supply for his family and friends,” the paper reported.

Capt. Ward amassed a huge estate estimated at $30 million, but the financial panic of 1873 diminished his multi-industrial fortunes to $5.3 million

His death from an aneurysm, on Saturday, Jan. 2, 1875, was labeled a “calamity,” and hundreds paid their respects at the mansion. “We have never had a man who has done so much genuine work for our western country,” intoned his eulogist.

Meanwhile, although the smoke and noise continued in Wyandotte, Eureka Iron ranked only eighth place nationally in steel output by 1870. Pennsylvania and Ohio mills, located in close proximity to coal and gas fields, provided superior fuel sources and soon out-produced their Michigan competitor. Eureka Iron closed in 1892, the same year Capt. Ward’s heirs, seeking to reopen the great man’s will, sued his widow — a much-younger woman who was his second wife and possessed a $4-million fortune. Decades later, George W. Stark remembered Eber Brock Ward in The Detroit News, writing,  “Providence was kind indeed to have spared him the shame and bitterness he must surely have endured had he lived.” db