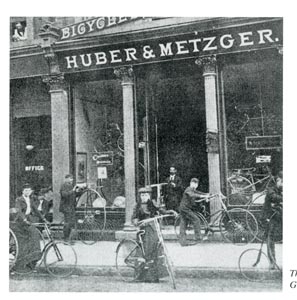 Sailing for England in 1895, William E. Metzger carried letters of introduction from Detroit and New York bankers, but after almost two weeks in London, he remained uninvited to the horseless carriage exhibition he’d traveled so far to see.

As the world’s first “automobile show” drew near, Metzger used his Detroit salesmanship, which he’d perfected in his bicycle shop at 13 Grand River Ave., barging in on the organizer and gaining an invitation.

After seeing gas buggies from Benz and Daimler — and a Thornycroft Steamer — run on the Tunbridge Downs racetrack, Metzger returned home inspired by what he saw. Convinced of the automobile’s future, he decided to change careers. By 1898, he was done with bicycles. He closed his bicycle shop and opened an auto salesroom in the former Biddle House hotel on East Jefferson. Here, as America’s first auto dealer, he sold a Waverly Electric to Detroit furrier Newton Annis. Then, teaming up with Ransom E. Olds, Metzger helped the Olds Motor Works become the young industry’s early volume leader by 1902.

Metzger, who understood the promotional possibilities of showcasing this new invention, organized the first Detroit Auto Show in 1899.

Leasing the Light Guard Armory, he staged the Tri-State Sportsman’s and Automobile Association with what one writer at the time called “the unlikely combination of big game trophies bagged in Africa” along with two Mobile steamers and two Waverly Electrics. A dog show was added in 1900 and 1901, but by the next year, with five dealerships in the city, the show was exclusively devoted to cars. After seven more years, Metzger turned over the reins to the new Detroit Auto Dealers Association — which continues to host and organize the annual show. In 1900, Metzger also helped put together New York’s first auto show.

In his career, Metzger was principle stockholder or an officer in 50 different companies. He served two terms as president of the Detroit Athletic Club and, in 1927, he led the National Association of Automobile Manufacturers.

One of Metzger’s greatest sales endeavors was at the 1903 New York Auto Show. He arrived at Madison Square Garden as Cadillac’s $1,000-per-month sales manager, but he only had four Cadillacs to place on display. Undaunted, by midweek Metzger had taken orders and deposits for more than 1,000 cars (one source says it was 2,286 cars), leading him to announce the car had been “sold out” and no more orders could be taken. What was astonishing was production for the car was months away, and a factory was yet to be established.

Leaving Cadillac in 1908, the year General Motors formed, Metzger launched the Everitt-Metzger-Flanders Co. to produce the E-M-F line of medium-priced, high-quality cars. Using mass-production techniques similar to those Walter Flanders helped Henry Ford develop for the Model T, the company assembled 15,300 cars at a plant on Dubois, near Franklin. By 1911, E-M-F was the nation’s fifth-largest automaker, but a distribution deal with the Studebaker Brothers led to its takeover. The three partners left and started a new company, and were soon building the Everitt car. Following World War I, the trio teamed up with Eddie Rickenbacker, the flying ace, and produced around 34,500 units — called the Rickenbacker — at their Cabot Street factory.

In the late 1920s, Metzger’s fixation with mobility inevitably turned skyward. Forming the Aero Club of Detroit and the Detroit Aviation Society wasn’t enough; he wanted airplanes built in the region and helped to create the Stinson Aircraft Co., the world’s largest producer of light commercial planes in the 1930s.

When he died in 1933, at the age of 64, Metzger left a legacy of accomplishment matched by few in Detroit industrial history. Yet he remains, as historian Yanik says, “One of the big unknown heroes of the early days.”