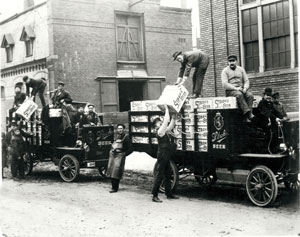 Throughout the 1890s, Detroiters became accustomed to a boy grinning with satisfaction as he poured himself a mug of Stroh’s Brown Stout. The happy lad appeared in an ad that also featured the Stroh Brewery Co.’s Bohemian Beer, a pale lager. A different attitude about beer prevailed then, and youngsters often punctuated the company’s marketing messages.

By the Gay Nineties, the Stroh concern was more than 40 years old. It had grown from a neighborhood beer delivered by wheelbarrow to become one of Detroit’s largest brewing operations, capable of producing 300,000 barrels a year. In the 20th century, Stroh’s would go on to compete against such long-forgotten local beers as Auto City, E&B, Detroit-Bohemian, and Voigt. Pfeiffer and Goebel provided the strongest challenges in the postwar years, before falling flat.

Detroit’s brewing industry had started in the 1830s, with English ales, porters, and stouts predominating in the market. Political upheaval in Europe prompted mass emigration from the German states after 1848, and many émigrés settled in Detroit, bringing with them a predilection for the dry bite of lagers. In his impeccable history, Brewed in Detroit: Breweries and Beers Since 1830, Peter H. Blum describes how the Germans also brought along their brewing acumen.

In 1850, Bernhard Stroh began brewing beer out of his home on Catherine Street in Detroit. The following year, he built a small brewery on the site, operating from there until 1867, when he erected an enormous enterprise at 331 Gratiot Avenue called the Lion Brewing Co. Just as British investors were involved in financing American railroads and other industries, so, too, were they acquiring breweries in the 1880s. Many were available, for as one Michigan brewer said, “We are in constant dread of a Republican legislature giving us Prohibition.”

Stroh held on, though. In 1902, his sons reincorporated the firm as the Stroh Brewery Co. Adopting the direct-fire technique of heating copper brewing kettles (rather than using steam), Julius Stroh commissioned a new eight-story brewhouse on East Elizabeth. It opened in 1914, just three years before Michigan did, indeed, adopt Prohibition. The company survived by marketing soft drinks and “near beer,” as well as ice cream, which it continued to produce until 1990.

After World War II, Stroh’s found itself at a crossroads. Beer drinkers began to favor lighter brews, and cans over bottles. Sales of 877,000 barrels in 1947 dwindled to just over 500,000 by 1950, behind Goebel and Pfeiffer — each boasting more than a million barrels. New president John W. Stroh had his work cut out for him. Changes that included a new beer recipe and Red Wings sponsorship resulted in sales of 2.7 million barrels by 1956, but a 45-day labor strike two years later allowed out-of-state brands into the local market.

The Stroh brand flourished through the 1970s, rising to No. 8 nationally. In 1981, the company acquired Schaefer Brewery. One year later, it leveraged the purchase of Jos. Schlitz Brewing Co. to become No. 3. But it was now $275 million in debt, with unwieldy operations in several states. Overcapacity led to the Elizabeth Street plant’s closing on May 31, 1985, and the historic Stroh complex was soon demolished.

Dallas-based Dean Foods, which had previously bought the Stroh’s ice-cream plant, closed it in 2007.

After purchasing the G. Heileman Brewing Co. in 1996, Stroh Brewery encountered unfavorable market conditions and a lack of advertising funds. The company’s 1999 sale saw assets going to Pabst Brewing and Miller Brewing. Pabst now owns the Stroh’s brand and contracts with Miller for manufacture. Fire-brewing is no longer practiced. From being heralded as “America’s Favorite” 110 years ago, the Stroh’s Web site today asserts that the beer “sports a craft brew pedigree.”