The long-sought-after matchup is expected to generate some of the biggest monetary numbers the boxing world has ever seen.

For starters, gate receipts are expected to reach $75 million based on an average sales price of around $4,200 per ticket in the 16,800-seat arena (ringside seats will go for $10,000 or more). That’s four times the previous record of $20 million. Top Rank’s Bob Arum, Pacquiao’s promoter, says foreign rights will add another bonanza as the fight sold for a record $35 million.

Add in cable television’s pay-per-view revenue of $310 million or more, and this will be the first fight that generates more than $400 million in total revenue. And that doesn’t include merchandise and other offerings from the two boxing champions. Estimates show Mayweather will earn at least $150 million from the fight, while Pacquiao will get around $100 million. Not bad for 36 minutes of work in the ring.

And no matter who wins, an expected rematch could set yet another new record, especially if the first fight is a nail biter that goes the full 12 rounds. Either way, both fighters are poised to join the elite club of professional athletes who earn $100 million or more in a given year. Besides Mayweather, other athletes on the list include Tiger Woods (eight times), Michael Jordan, Mike Tyson, Evander Holyfield, and Formula One driver Michael Schumacher (adjusted for inflation).

For Mayweather, who will likely go down as the most profitable athlete in any sport, the foundation of his career couldn’t have been more unsettling.

While his father, Floyd Mayweather Sr., was a boxer, along with his uncles, Jeff Mayweather and Roger Mayweather (Floyd’s trainer), his aunt died from AIDS, the result of her abusing drugs, while his mom has long been a heroin addict.

“People don’t know the hell I’ve been through,” he told The New York Times in 2011. Mayweather, who now lives in Las Vegas, claims his father spent time with him in the gym, but there was little interaction outside the ring. “I don’t remember him ever taking me anywhere or doing anything that a father would do with a son, going to the park or to the movies or to get ice cream,” he said. “I always thought that he liked his daughter (Floyd’s older stepsister) better than he liked me because she never got whippings and I got whippings all the time.”

The champ spent his early life shuttling between Grand Rapids and the East Coast. “I think my grandmother saw my potential first,” Mayweather said. “When I was young, I told her, ‘I think I should get a job.’ She said, ‘No, just keep boxing.’ When I was about 8 or 9, I lived in New Jersey with my mother and we were seven deep in one bedroom and sometimes we didn’t have electricity. When people see what I have now, they have no idea of where I came from and how I didn’t have anything growing up.”

Mayweather does credit his father and two uncles for developing his boxing skills, including a defensive move where he turns his body away from each shot from his opponent. While he remains undefeated as a professional boxer, Mayweather has tasted defeat in the amateur ranks, going 84-6, though we won Golden Gloves championships in 1993, 1994, and 1996. At the summer Olympics in Atlanta in 1996, Mayweather took home the bronze medal, though the outcome was heavily disputed during the fight for the silver medal when the judges failed to record a two-point deduction to Bulgaria’s Serafim Todorov for slapping. 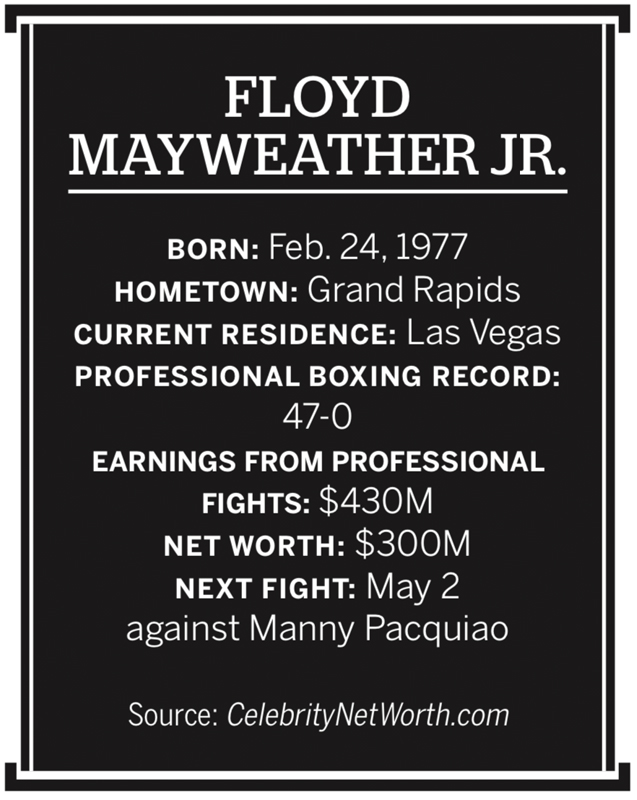 After the Olympics, Mayweather embarked on his professional career, and over the course of 47 matches, he remains undefeated (26 KOs). The late Emanuel Steward, who trained 41 world champion fighters, said Mayweather was “the best fighter, pound-for-pound, than any fighter” he had ever seen.

“The thing with Mayweather is he has lightning quick hands and feet, but it’s those defensive moves that give the other fighters fits,” said Steward, who trained many boxers at the former Kronk Gym on Detroit’s west side. “He’s real sneaky that way. You hit him on the side and he turns away from the punch, which lessens the physical blow. You hit him in his midsection or to the head, and he does the same thing, he turns away from punch. That goes unheralded, in my opinion.”

With total career earnings of around $430 million, CelebrityNetWorth.com estimates Mayweather’s net worth at $300 million. “If anyone has followed my career, they know that there’s been a lot of obstacles and a lot of ups and downs throughout my career,” Mayweather says. “But day in and day out, and in the square ring, I went out there and always did my best.”