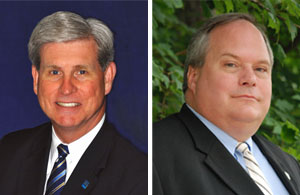 The exploding national debt is one of many urgent issues the White House and Congress must address in 2011. At the end of 2010, our national debt surpassed $14 trillion. When divided by last year’s gross domestic product of $14.6 trillion, our national debt to GDP ratio was roughly 95 percent — a near-record for post World War II America, and a hindrance to economic growth.

As it stands, government is financed largely through one or more of the following processes: taxation, borrowing, or inflation.

Some suggest we should reduce our national debt by increasing taxes, but the U.S. already has the second-highest average corporate income tax rate in the industrialized world (39.3 percent). Increasing corporate taxes would further harm U.S. competitiveness. In addition, talk of increasing taxes on the wealthiest 1 percent of income earners ignores the fact that this population sector paid 40 percent of all personal income taxes in the U.S. last year, while creating the majority of jobs.

The interest payment on our national debt in 2009-10 was $414 billion, financed at an historically low average rate of 3.1 percent. Many economists predict this rate could nearly double over the next four years, raising our interest payments to $800 billion by 2015 — more if the debt increases, which is inevitable if our government does not reign in its spending.

It is time for government officials to make difficult spending cuts. If not, we fear there will be austerity problems like those facing much of Europe today.

There’s also the chance that double-digit inflation could return; it was last seen in America during the 1979-81 economic recession.

The need for visionary leadership has never been greater. We need leaders who believe in the American traditions of individual responsibility, civic stewardship, thrift, limited government, and sound fiscal policy embodied by the men and women who made this country great.

We need leaders with financial acumen and integrity who will not sacrifice America’s long-term viability for the short-term political gains often defined by pork barrel projects.

Gov. Rick Snyder and the Michigan Legislature face similar challenges while debating spending cuts relative to tax increases to resolve the $1.4 billion deficit in the fiscal 2011-12 budget. We believe the following five policy suggestions will help the Wolverine State regain its economic footing.

1) The tax structure in Michigan punishes businesses, and must be reformed. The nonpartisan Tax Foundation ranks Michigan’s corporate tax system third worst nationally. The first order of business is the repeal of the nearly 22-percent surcharge on the Michigan Business Tax.

2) Michigan is ranked last in economic performance in the American Legislative Exchange Council’s 2010 edition of Rich States, Poor States. Michigan needs labor policies that give employees the right to choose whether to financially support or join a union, while giving employers the freedom to hire employees who best fit their needs. A business-friendly environment is essential to regaining the more than 700,000 jobs lost in Michigan since 2000.

3) The Detroit Regional Chamber has argued repeatedly that Michigan can save more than $800 million annually by privatizing prison functions like food services, while matching the sentencing and parole guidelines of other Midwestern states.

4) Since 2007, the Mackinac Center for Public Policy found the state’s private sector lost 70 times more jobs than its government counterparts. There are 635,300 people holding public sector jobs, making government the largest source of employment in Michigan. A 10-percent reduction in public sector jobs would fuel innovation in government and provide substantial tax savings.

5) Legislators must change the retirement system for new hires in Michigan’s K-12 public schools from a defined benefit plan to a “401(k) style” defined contribution plan. Almost all private companies have 401(k) plans, and many state and local governments should follow their example. Under such a system, the state would match teacher contributions at a set rate. The pension assets would be owned and controlled by the teachers, and managed by a private company. Over time, the state could get out of the pension business for teachers and avoid the massive unfunded liabilities that plague numerous other states.

The time is now. Politicians in Washington and Lansing must adopt rational policies to restore U.S. competitiveness and the American Dream. Politicians and voters must decide on the proper role of government and public spending limits to restore U.S. competitiveness and job growth. Otherwise, Michigan and the United States will experience a long, slow deterioration in stature and economic strength. db