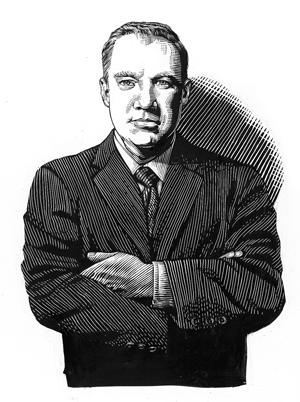 Henry Ford wasn’t to blame, as some contend, for suburban migration. By building a car for the “great multitude” he helped usher in modern life, but exploration was rooted in humankind long before that.

Ever since the first ships launched centuries ago, people have set out in search of a better life. What they left behind was a dense patchwork of shops, offices, monuments, homes, and squalor.

Back in Ford’s day, there was little forethought given to master planning; zoning laws were virtually nonexistent. That explains why Detroit, following the turn of the 20th century, became a hodgepodge of factories, neighborhoods, office towers, and manors. Need proof? Take a walk along Woodward Avenue. It is all the evidence anyone needs.

On one block is the Hecker-Smiley Mansion, on the next block is an old factory, and on the next block is a series of merchants. One hundred years ago, the most desired address in the city was Woodward Avenue. Locating on Woodward was the only way, short of advertising to a largely illiterate population, to substantiate and brand a business.

Consider that the horse and buggy, along with walking, were the primary transportation options. Although we admire those grainy old sepia-toned photos of a downtown Detroit brimming with people as they took in a march by the Grand Army of the Republic or a parade of elephants headed to the circus, the reality is the populace had nowhere else to go.

Once streetcars began operating on the main thoroughfares, followed by automobiles, the race to the suburbs was on. Given the majority of residences were walk-up flats in or near downtown, people couldn’t wait to trade in their shoebox dwelling for a brick home on a tidy, tree-lined street in a master-planned community.

So is that the end of the story? It was, until a group of business leaders like Mike and Marian Ilitch, Peter Karmanos Jr., Dan Gilbert, and Cindy Pasky wrote a new chapter. It’s a story about a light rail train operating on a three-mile stretch of Woodward that connects Jefferson Avenue to West Grand Boulevard.

The M1 Rail project, expected to be operational by 2015, is another draw for the hundreds of professionals, young and old, who are clamoring for a loft in a historic downtown tower where they can walk to a football game, an opera, or an art gallery.

Detroit kick-started global transportation, and everyone gladly climbed aboard. Now things are reversed. Instead of catching the first streetcar for a better life, we’re hitching a ride to history. The new rail line will spur development along Woodward Avenue, just as another rail line did a century ago.

And a generation from now, when the sidewalks are again teeming with people, some may wonder why anyone ever left.  db