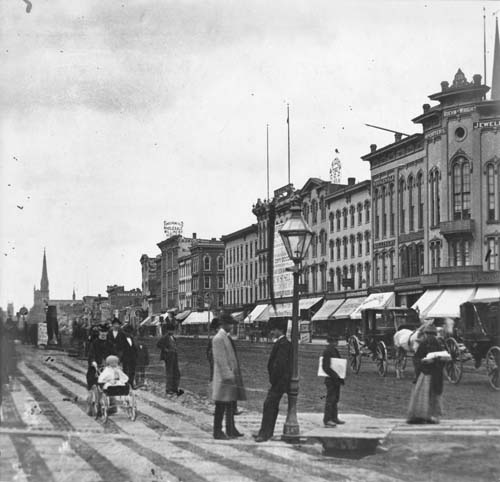 As a political novice in 1889, Hazen S. Pingree was appalled by what he discovered when Detroiters elected him mayor. Real estate developers were bribing city council members and the burgeoning metropolis had grown in slovenly fashion, with unpaved streets and no urban rail service. Pingree, who had earned his wealth in the shoe manufacturing business, set about to make reforms. An immediate challenge was the city’s exorbitant outlay for street lighting. Electric companies were reaping enormous profits by charging twice as much as customers paid in other cities.

The cleverly designed electric arc light created by Charles Brush, a University of Michigan graduate, started things off in 1879. The following year, several prototypes were tested in the warehouse of garden-seed merchant D.M. Ferry & Co. in Detroit. The Brush Electric Lighting Co. was formed, and businesses and other establishments along Woodward Avenue began to wink with electric light; a generator in the Detroit Free Press Building initially produced the current. Incandescent lights soon were perfected, and competing electric companies sprang up. Separately, Edison Illuminating Co., progenitor of today’s DTE Energy, was started in 1886 to provide service to industrial and commercial customers. (Henry Ford became the company’s chief engineer.)

Naturally, electric streetlights were opposed by Detroit Gaslight Co. and Mutual Gas Co., which had served the city since 1851 and 1871, respectively. But after early setbacks, Brush won the $95,000 annual contract in 1884 to illuminate parts of Woodward and Jefferson avenues. More than 130 spectacular iron towers, some reaching 160 feet tall, went up to support hundreds of arc lights producing 2,000 candlepower apiece. As service expanded and the city’s annual contract grew to $137,937, Brush superintendent William Fitzgerald saw opportunity. Just before Pingree’s election, he joined upstart Detroit Electric Light & Power Co. and cast an eye toward wresting away the street lighting monopoly.

Successfully underbidding Brush set off what historian George Catlin calls “a merry war.” Brush refused to provide Detroit Electric with access to its towers, so the new company set up twins. “Two sets of towers and poles did not add beauty to the streets,” Catlin writes. But the enemies found common cause when Pingree, who had already taken on the gas companies’ shared monopoly, promoted a municipal light plant. City council members were offered bribes to oppose the measure. Some actually refused the handouts.

Besides handling the funny business, Pingree faced a reluctant populace. The city had spent more than $600,000 to acquire and develop Belle Isle, and a similar amount was required for the power plant. Passionate and blunt-spoken, Pingree prevailed, and in April 1893 a bond measure was passed by voters, 15,282 to 1,245, to build the city-owned plant. A riverfront site was chosen between Bates and Randolph streets and was acquired for $63,135. Rebuffed, Brush and Detroit Electric, then coming under the control of General Electric, blacklisted any technically skilled man who left the company to work for the city.

In response, Pingree appointed the unimpeachable Alex Dow, a newcomer, to oversee development of the plant. Dow chose conventional lamp poles instead of tall towers, and within a couple of years the city lit its own streets for $36 annually per lamp. A new challenge lay in figuring out who would buy power during the daytime; the adoption of electric motors in factories was encouraged.

By the early 1920s, shimmering with 17,522 streetlights, Detroit was one of the nation’s best-lit cities. Taxpayers were given a good return on their investment. The altruistic Pingree served four terms as mayor and two as Michigan’s governor. The inscription on his monument in Grand Circus Park says he “was the first to warn the people of the great danger threatened by powerful private corporations.” For this service, he is remembered as “the idol of the people.” db