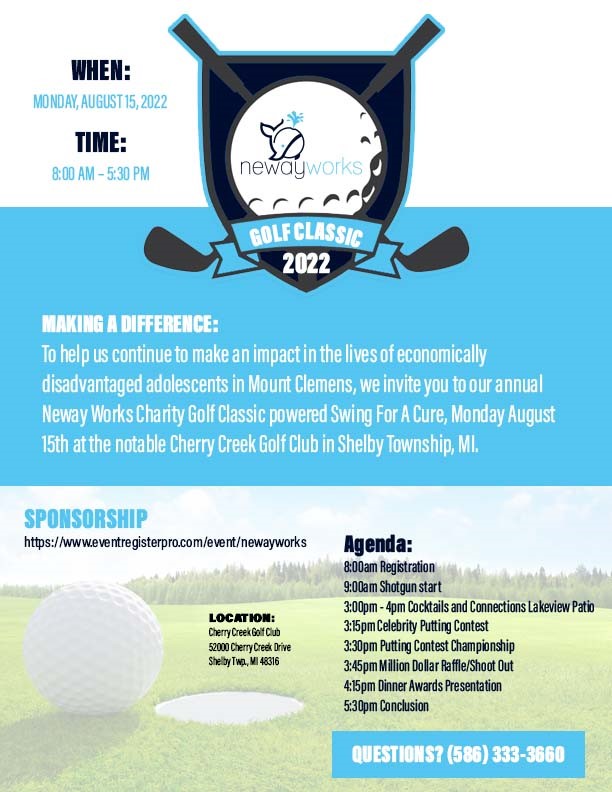 100% of the proceeds will benefit their continuing efforts of improving the mental health and overall wellbeing of at-risk Macomb County teens.

Tournament format is a four-player scramble and will feature many prizes, including a MILLION DOLLAR HOLE-IN-ONE, $10,000 HOLE-IN-ONE, closest to the pin contests, “Beat the Pro” competition, putting contest, continental breakfast, lunch at the turn, steak dinner awards ceremony, and MUCH, more!

Woodward Sports Network Host of “Big D Energy” and Best of Hour Detroit Sportscaster, Neal Ruhl. Ruhl is the television and radio voice of the Oakland Golden Grizzlies on TV-20 Detroit, ESPN+ and 1270AM, having called games in the NCAA Tournament in 2010 and 2011. He has called games featuring over 53 NBA Draft picks, over 43 MLS Draft Picks and three current Major League Baseball players. Additionally, he calls national soccer broadcasts for the USL and NWSL on ESPN+ and Yahoo Sports.

More celebrity guests will be announced as they are confirmed!