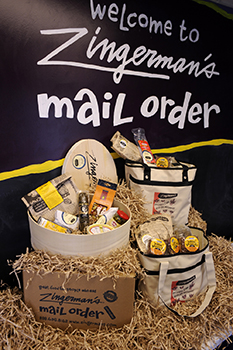 Zingerman’s Mail Order, the online shop for the popular Ann Arbor company’s food and gift products, has purchased a 33,600-square-foot building next to its facility at 620 Phoenix Dr. to expand its growing operations.

The company will move into the new space over the next 10 years as the leases of current tenants — Motown Automotive, Advanced Print and Graphics, Rightaway Delivery, and Whirly Ball of Ann Arbor — expire.

“We’re currently in 24,000 square feet, and we know we’re going to need more space,” says Toni Morell, one of three managing partners of the mail order division, which recorded $13 million in revenue last year. “Rather than renting or buying a giant space that’s empty because we don’t need it this year but (will soon), we thought it made more sense to slowly move and be a little more strategic about it.”

Morell says the trickiest part in the company’s growth projections is that the enterprise does about half of its business in six weeks during the holiday season. During that time, the staff at Zingerman’s Mail Order grows from an average of 50 employees to nearly 400.

“So we can handle the space that we’re in for most of the year, and then we have this explosion of sales that need to all happen at once,” Morell says. “So this will allow us to flux into a larger space as needed. It also gives us the chance to come up with some really great ideas of what we could do with the space otherwise.”

The company fulfills orders made through zingermans.com, where top sellers consistently include bacon, bread, and coffeecake.

Jim Chaconas, Brendan Cavender, and Richard Timmons of Colliers International Ann Arbor represented both Zingerman’s as well as the seller, FJS LLC and John Sposito, for the sale.