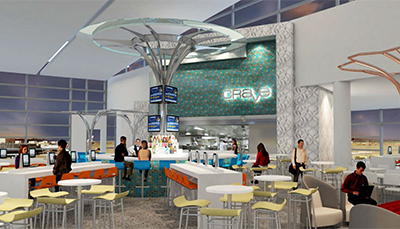 The Wayne County Airport Authority has approved 25 new food and beverage concepts — including Plum Market/Zingerman’s Deli and a selection based on Detroit’s Eastern Market. The new retailers will open inside the McNamara Terminal over the next year and a half.

The new program will add approximately 22,000 square feet of additional space to the McNamara Terminal Food and Beverage program, and is expected to generate nearly $31.6 million of capital investment. During the first full year of the program, sales are anticipated to be approximately $63 million, an increase of more than 47.5 percent above the present program.

“Our current concession program and operators have been well-recognized since we opened the McNamara Terminal more than 12 years ago, and they do a fantastic job; but in order to continue to compete and stay fresh, we need to be willing to change and adapt with the times,” says Greg Hatcher, Wayne County Airport Authority’s director of concessions. “Combined with the recent improvements to our retail program, I’m confident these new venues will help our airport remain on the leading edge in the industry for unique passenger services and amenity offerings.”

The setup — which will incorporate iPad and tablet self-ordering stations, mobile point of sale devices, social media and web-based platforms, and a virtual concierge — will include several big brands, including P.F. Chang’s China Bistro, Longhorn Steakhouse, and Potbelly Sandwich Shop.

Other offerings will include Eastern Market Dining Experience in the south end of Concourse A, now anchored by Crave Robata Grill & Bar. It also includes Grobbel’s Gourmet Deli, artisan meats by Corridor Kitchen, gelato and sorbetto by Palazzola’s, and the Coffee Beanery. Paying homage to the Shed 5 project at Eastern Market, the airport store will offer a communal dining area with a lounge serving more than 18 craft/domestic beers and Michigan wines.

“We’re obviously a major international hub for Delta Airlines, so many of our passengers are just passing through,” says Brian Lassaline, spokesman for the Wayne County Airport Authority. “Branded concepts are important so travelers that may not be as familiar with (a certain operation) can gravitate to the brands they know. But, there’s a balance between strong brands and local presence, (and) making sure that people understand what Detroit is all about.”

The new food and beverage options, which should be available by fall 2015, include: