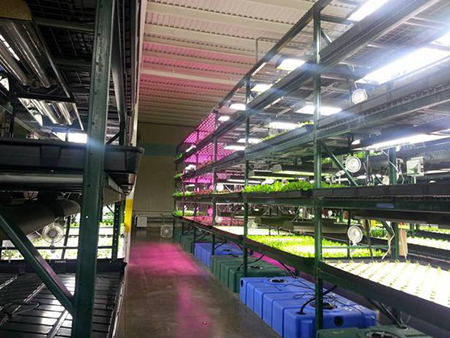 A year-round “vertical” farm operation is coming to the Brightmoor neighborhood of Detroit that will grow vegetables, herbs, and some fruits. The vertical farming method uses 95 percent less water than conventional farming.

“The produce will be grown in a previously abandoned warehouse in the Brightmoor neighborhood and will employ people from the neighborhood,” says Jeff Adams, founder of Artesian Farms of Detroit, a social enterprise that is collaborating with Green Spirit Farms of New Buffalo, on the west side of the state, on the project.

Artesian Farms of Detroit will grow the produce using vertical growing stations, an approach developed by Green Spirit Farms. The stations are 14 to 16 feet high with four to six grow levels. Each station can grow about 1,200 to 2,400 plants and will be able to achieve nearly 20 harvests per year of spring mix, spinach, kale, basil, and other vegetables.

Green Spirit Farms, which has been operational since 2012, is a network of farms throughout the Midwest. Another vertical farm is being developed in West Virginia, and there are plans for a farm in New York.

The produce will be delivered to local grocery stores and restaurants starting in May.