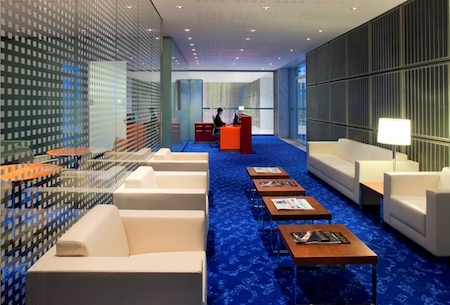 After an eight-year hiatus, Yamasaki Inc., an architecture, engineering, interior design, and planning firm, has returned to Detroit with a new headquarters in the Fisher Building. The 3,000-square-foot facility marks the latest chapter in the company’s history, which was established in 1957 by founder Minoru Yamasaki after he moved to the city.

Following Yamasaki’s death in 1986, the firm then based in Troy survived until it fell into receivership in 2009. Robert Szantner, president of Yamasaki, began his professional career working under Yamasaki in 1984 and stayed at the firm until 2009. Since then, Szantner worked with many of the firm’s clients on projects worldwide, ultimately buying the dormant firm’s intellectual property, allowing him to open in Detroit under the original name.

“The marketplace has provided us with an opportunity to bring back the Yamasaki name to its roots,” says Szantner. “Detroit is about to grow in every way, including vertical. That fits into the experience of our professionals with urban projects of all types, so we want to play a role in the transformation of this city, as we have in so many projects here and around the world, while always being based in southeast Michigan. We have designed more than three million square of office space in Michigan alone, and more than five million additional square feet outside the state.”

Yamasaki currently employs 12 professionals out of the Detroit office and a space in Portage, five of whom worked at the original firm. Yamasaki and his team are noted for designing the World Trade Center in New York City, St. Louis’ Lambert Airport, buildings for the United States Federal Reserve, the convention center in Qatar, multiple corporate headquarters, the One Woodward Building in downtown Detroit, and several structures on Wayne State University’s campus in Detroit.

“We are reinterpreting Yama’s values, that we learned from him,” adds Szantner. “Simplicity in design, the use of sustainable materials, buildings that enhance social interaction — those are all qualities that buildings need now, with new applications.”