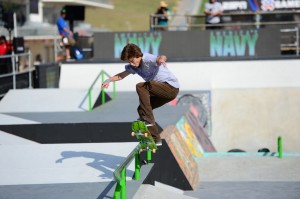 An amateur skateboarding competition, a qualifier for the X Games in Austin, Texas is coming to Royal Oak today and Saturday at Modern Skate Park, a facility that offers one acre of indoor ramps and rails.

“We’re stoked to bring ‘The Boardr Am’ up to Detroit because we’ve never really done an event up here before,” says Ryan Clements, Boardr contest organizer. “It’s a rad American city that has been beyond welcoming to us and has a thriving skate scene.”

The Boardr Am Series has already hosted amateur skateboarding events in Los Angeles, Houston, and Tampa Bay this year. Winners from the competition in each city will compete in Austin at the X Games in June. The X Games includes skateboarding and BMX racing competitions, along with musical performances by artists such as Nicki Minaj.

In addition to an invite to compete in this years X games, the winner of the Royal Oak event will receive an all-expenses paid trip to Austin and be chronicled in a one-hour show as part of ABC’s World of X Games — a documentary produced by Boardr that follows each winning skaters journey to the X Games in Austin.

For more information and to register to the event, visit theboardr.com