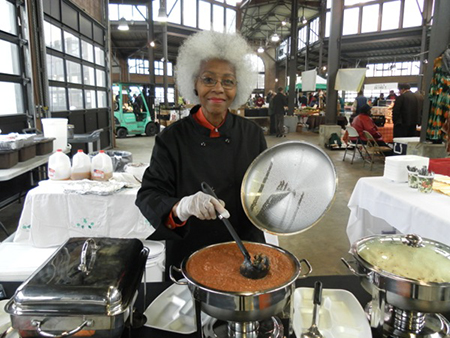 tA cooking school dedicated to nutrition and culinary arts for home cooks is one of the newest startups to spring out of Wayne State University’s Blackstone LaunchPad business accelerator program.

t“Most home cooks are familiar with cooking brown rice or using basil in a recipe,” says says Vazilyn Poinsetta, the founder of AVC (Art of Vegetarian Cuisine) Kitchens, who is also a nutrition and food science major at WSU. “However, many may not be familiar with preparing nutritious grains such as buckwheat or spelt, or adding cardamom to savory cabbage for a creative flavor change.”

tPrimarily offering vegetarian cooking classes, AVC hosts a variety of classes, including the “Eating Outside of the Box” series, which kicked off at Eastern Market in June. The classes — which centers on introducing participants to new foods and creative ways of preparing familiar foods — also provide information on shopping with a bridge card or on a limited food budget.

tAnd, of course, there are food samples involved.

t“It is one thing to tell families to eat a variety of fruits, vegetables, and whole grains, but if they have never tasted certain varieties of foods, they most likely will continue preparing and eating the same familiar foods and missing valuable nutrients,” Poinsetta says. “People are not too willing to spend money on new foods they are not sure they will like. There is an exciting world of diverse and nutritional good foods available, and AVC Kitchens’ mission is to stimulate nutrition awareness and awaken the culinary palate of the home cook.”

tPoinsetta — who also makes and sells traditional baked goods, along with a specialty product line for vegan, gluten free, and diabetic diets — credits Blackstone LaunchPad, a business accelerator for students at WSU and Walsh College, with helping her move her company forward in a professional direction.

t“Blackstone LaunchPad has been a tremendous help to me in obtaining and designing a website, teaching me more about computer technology, and helping me with a Facebook page,” she says.

tNext up on AVC’s calendar is a cooking demonstration at 4 p.m. today at Islandview Farmers Market (7200 Mack at E. Grand Blvd). She will also host free classes this September in Shed No. 3 at Eastern Market.