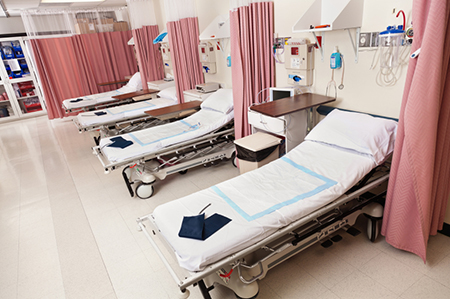 A professor from Wayne State University is among three worldwide researchers to receive a $3.2-million grant to prove the effectiveness of a treatment for one of the most common infections that is contracted in hospitals.

“Our findings have the potential to address a serious problem, drastically decrease the spread of a dangerous infection, and improve the safety and well-being of hospital patients and residents in nursing homes and extended care facilities,” says Steven M. Firestine, professor of pharmaceutical sciences at the WSU.

According to the Centers for Disease Control and Prevention, a bacterium called C. difficile causes diarrhea and intestinal conditions such as colitis, and can lead to prolonged use of antibiotics, gastrointestinal tract surgery, hospitalization, and colon problems.

“The infectious form of C. difficile is the spore, a resistant structure that can survive on hospital surfaces for extended periods,” says Firestine. “Our focus is on the synthesis and evaluation of compounds that prevent the conversion of the spore into a growing bacterium.”

In the United States alone, there are approximately half a million C. difficile cases annually, with a mortality rate greater than 2.5 percent. The annual costs associated with the disease are estimated at $3.2 billion, according to a WSU statement.