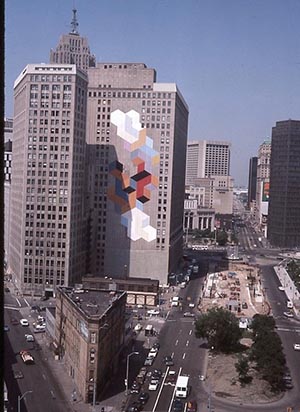 New York-based street artists How & Nosm are planning to design and paint a mural measuring 354 feet high by 81 feet wide — considered the world’s tallest — on the east-facing wall of the First National Building in downtown Detroit in May.

The mural, titled “With All One’s Heart,” will pay homage to the late pioneering abstract artist and Detroit native Alvin Loving. How and Nosm (Raoul and Davide Perre) are identical twin brothers known for their large scale graffiti based murals that adorn city walls around the world.

Work on the mural is expected to start on May 10 and wrap up by the end of the month. Once completed, it will eclipse the 320 feet St. James Town mural in Toronto, currently believed to the world’s tallest.

“After researching the history of public art in Detroit, we came across a handful of really interesting murals from the 1970s,” says Anthony Curis, founding partner of Library Street Collective, a Detroit-based contemporary art gallery, who is producing the project along with Bedrock Real Estate Services, in association with New York-based Colossal Media. “Unfortunately, a lot of them are no longer visible. We wanted to find a way to recreate or honor these works. How & Nosm were instrumental in helping to bring a contemporary version of Loving’s work back to life.”

The new mural will also honor a painter who fell from scaffolding while completing “Message to Demar and Lauri” and died. Loving was devastated and is said to have never gone back to see the completed mural.

Curis says safety and proper execution will play a major role in the new mural.

In 1989, the fading mural was removed after being deemed too costly to maintain despite protests from the local art community.

For longtime Detroit art staple George N’Namdi, president of the N’Namdi Center for Contemporary Art in Detroit’s Midtown district and close friend of Loving, it was a loss to see the mural go.

“At the time, it boiled down to economics versus a lasting appreciation of the arts,” N’Namdi says. “The (previous owners of the First National Building) thought people didn’t care. It may have needed some restoration, but now we are without an important piece of art by a significant African-American artist and an even more important Detroit artist.”

N’Namdi says he’s excited about the prospect of welcoming something new to the downtown art landscape that honors the past while pushing the arts community forward.

“That’s an important wall with a lot of history,” N’Namdi says. “You want to have a strong piece that you’d want people to travel to see. Honoring Loving’s work is one thing, but it’s important for the artist to have their own voice and vision.