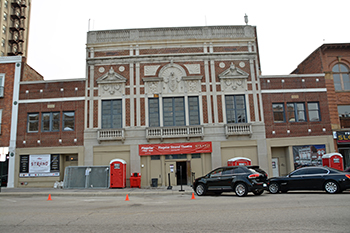 Work began today on a $20-million renovation project of the Flagstar Strand Theatre for the Performing Arts in Pontiac, which will include restoring the theater, along with adding a Slows Bar-BQ restaurant at the facility and an event space. The theater, acquired by Brent and Kyle Westberg, is expected to reopen in the fall.

“Brent and I looked at the Flagstar Strand Theatre project as an opportunity to continue the forward progress of the reinvention of the city of Pontiac, particularly downtown Pontiac,” says Kyle Westberg, president and CEO of Pontiac-based West Construction Services.

The former Strand Theatre, located at 79 Oakland Ave. in downtown Pontiac, first opened in 1921. The theater closed in the 1980s and then a theater troupe reopened the facility briefly in the 1990s before it closed again. The City of Pontiac attempted a renovation of the theater in the early 2000s, putting more than $10 million into redoing the building’s foundation, before ending the project.

Detroit-based Slows Bar-BQ will operate a ground floor, 110-seat restaurant at the theater (open to the public) and a bar.

“It’s going to be a hip, eclectic, casual atmosphere in both (the bar and restaurant) — similar to (Slows) restaurant in Detroit,” Westberg says. “It’s going to be an inviting, very comfortable space. The concept of the whole building is to get people to hang out with friends and family — there’s a casual, fun vibe.”

He says there will be an event space on the second floor designed for smaller functions, which will feature large windows. Slows Bar-BQ will cater events at the space, which will have a “contemporary, eclectic feel.”

The Strand Theatre in the 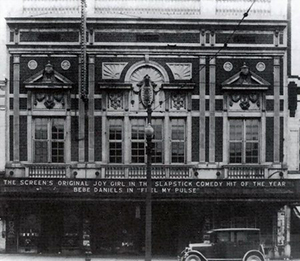 “Our programming initiative is to inspire and educate via the performing arts,” says Bill Lee, president and CEO of the nonprofit. “And to that end we will present a broad array of live entertainment to a wide and diverse audience base, which will include national touring shows and artists from all genres of music, theatrical productions, comedy, and family entertainment.”

He says he intends for the theater to be a place where the 2.7 million people living within a 20-minute drive of downtown Pontiac can easily come and enjoy a dinner and show without dealing with parking issues or large crowds.

“It’s got to be a pretty special event for other people to go (to downtown Detroit to see a show) so with the convenience of this theater — valet parking, private restrooms — that’s one of our packages — good food, people will come and hang out,” Lee says.