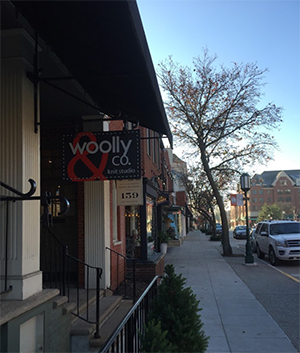 Woolly & Co., a knit studio offering a variety of yarns along with classes for beginner and experienced knitters, has opened in downtown Birmingham.

“Knitting is seeing a resurgence, but unfortunately it’s still associated with grandma’s itchy sweater,” says Aviva Susser, owner of Woolly & Co. “I hope that Woolly & Co. will break that mold and help people see that knitting is a way to (take) a ball of yarn and imagine what it could be — either a cool sweater, a pair of fingerless gloves, or an afghan — and make that vision a reality. I want to bring hip back to knitting.”

Susser says the 1,700-square-foot studio, located at 147 Pierce St. next to Toast Restaurant, offers fibers from all over the world, two-hour knitting classes, and handmade knits such as hats, sweaters, scarves, and fingerless gloves. She says the store carries yarn brands such as Blue Sky Alpacas, The Fibre Co., Pepperberry Knits, and Wool and the Gang, among others.

“We offer a really friendly environment where people can even bring their own knitting and come sit at the sitting area with a couch, a fireplace, and a chair and and socialize with other people that come into the store,” Susser says.