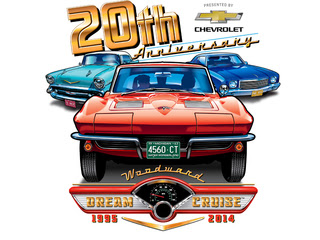 For the first time, Christmas for car lovers, aka the 2014 Woodward Dream Cruise, to be held on Aug. 16, will star in a one-hour nationally syndicated show produced by WXYZ-TV Channel 7, and distributed through its parent company, E.W. Scripps Co. Already, affiliates in New York, Los Angeles, and Chicago have agreed to air the show.

Chevrolet will set up a large display along Woodward, in the so-called Birmingham Triangle park, located just south of the 555 Building. Channel 7 also will be located in the park. Michaels, president and CEO of the Detroit Parade Co., says added revenue from last year’s cruise meant larger contributions to the nine participating cities that host the event, and he expects that trend to continue.

“This is a regional event, but it’s really the cities, our corporate sponsors, and everyone who comes out that makes the Dream Cruise such a special event,” Michaels says. “I think people will really like all the merchandise this year, given this is the 20th year.”

With the Ford Mustang celebrating its 50th anniversary, Ferndale officials report they’ve received 1,150 registrations from owners interested in displaying their vehicles in Mustang Alley, which runs along Nine Mile Road during the Dream Cruise (it starts at 10 a.m.). In a normal year, the city hosts 700 to 800 Mustangs.

“Ford is our sponsor and they are going to have a bigger presence at East Nine Mile, including a special 50th anniversary display,” says Michael Lary, Ferndale’s director of special events. “We’re also the only hosting city that offers three days of activities for the Dream Cruise, so we have all kinds of events planned.”

On Aug. 15, the city will host an Emergency Vehicle Show featuring police, fire, and military vehicles as well as ambulances. The show will run from 1 to 8 p.m., and feature a cruise at 5:30 p.m. The official ribbon-cutting for the Dream Cruise will be held in Ferndale at 5 p.m.

Lary adds they city and Ford will host a live entertainment stage, a kids play zone, merchandise displays, and food booths along West Nine Mile Road between Thursday and Saturday.