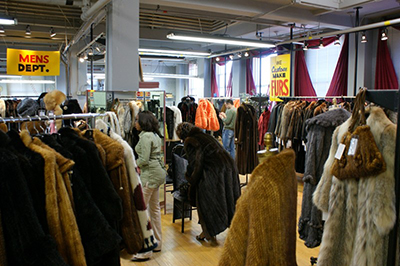 Wolverine Fur Co., which specializes in luxury furs and leather, will move next week from the Hemmeter Building in downtown Detroit’s Paradise Valley (formerly Harmonie Park) to a storefront in Eastern Market.

Clay Campbell, owner of Wolverine Fur, says after being in the Hemmeter Building (which was sold this week to Lear Corp.) for more than 40 years, he began looking for a location with convenient parking and easy access to services. Clay says the new storefront, located on Russell Street, “couldn’t have been better for us and our clientele.”

He says the newly refurbished 6,500-square-foot space will allow the company to expand its showroom.

“Our old address was the last remnant of an industry that thrived in Detroit from the days it was a fur-trading outpost,” says Paul Petcoff, a partner in the company whose late father was a founder of the business. “The skills and experience of one generation were passed on from one to the next.”

Wolverine Furs offers a wide variety of fur coats, along with services such as fur appraisals, cleaning, and repair.

Wolverine Fur was founded as Detroit Fur Storage Co. on Ferry Street in the early 1950s, and moved into the Hemmeter Building in 1972 .