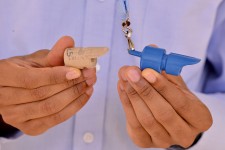 A student at Western Michigan University has secured a design patent for a device that assists those with speech impediments, as well as others seeking to improve their articulation and elocution.

“This patent validates the design of my product and my hard work to this point,” says Daniel Floyd, a sophomore at the Kalamazoo-based college. “It will also make it easier to speak with future influencers and supporters and grow my business.”

Called the SpeechMasterPro, the device is placed inside the mouth and is held in place by the user’s teeth. By trying to avoid touching the device with their lips while speaking, the user strengthens their jaws and facial muscles, thereby improving the projection of clear speech.

Floyd, who was born with a speech disorder that makes it difficult to enunciate certain words and sounds, says he first began developing the speech aid after watching the movie, The Great Debaters, starring Denzel Washington.

“(In the 2007 film), Denzel had five debaters practicing for debate, and they were practicing with a radish in their mouths,” Floyd says. “The radish forced the debaters to over enunciate their words and sounds, so once they took the radish out of their mouth, because of muscle memory, they would pronounce words as if the radish were still there.”

Floyd, age 15 at the time, began practicing speaking while biting a wine cork and noticed an improvement in elocution. He began collecting wine corks from area restaurants, reshaping them to rest more naturally between the front teeth.

Since developing those first prototypes, Floyd has teamed up with PDT, a Chicago design firm to develop a version of the SpeechMasterPro that can be mass produced, as well as a manufacturer that has agreed to fabricate several Food and Drug Administration approved silicone prototypes.

“(Daniel’s) story of how he came to create SpeechMasterPro and his work ethic are truly inspiring,” says Lara Hobson, director of operations for Starting Gate, WMU’s student business accelerator. “It is rewarding to see one of our student entrepreneurs reach this level of success.”

The utility patent for the device is pending, and Floyd has his eye on the future, with plans to grow his business by developing alternate distribution channels in addition to his online store.