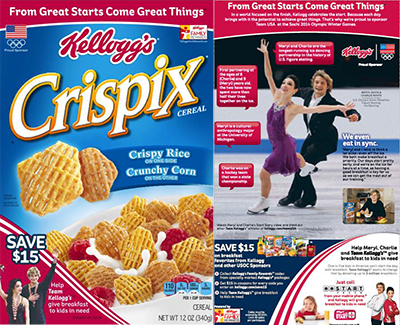 American ice dancers Meryl Davis and Charlie White are among 11 Olympic and Paralympic athletes to be featured on specially marked products from Battle Creek-based Kellogg Co. starting next week. Davis and White, who grew up in West Bloomfield Township and Bloomfield Hills, respectively, will be featured on Crispix boxes.

“Charlie and I are so excited to be on the Crispix box,” Davis says. “We did an event with Kellogg’s not long ago where we first saw the boxes with our pictures on them. We were continuously sneaking peeks at the boxes and pinching ourselves.”

The Sochi Olympic Winter Games run from Feb. 7-23. Other athletes included in Team Kellogg’s promotion include:

In addition to the front-of-pack images, all of Team Kellogg’s athletes will be featured on the back of specially themed packages for a wide variety of Kellogg’s brands.

Each of the athletes also will be helping to provide breakfast as part of the “Give A Great Start” initiative, which continues through the end of the Sochi 2014 Paralympic Winter Games (March 7-16). As part of the campaign, the athletes will show their support by tweeting with #greatstarts and encouraging consumers to do the same. For each tweet with the hashtag, Kellogg’s will help provide breakfast for a child in need.

Kellogg’s “Give A Great Start” initiative is part of the company’s Breakfasts for Better Days commitment to provide 1 billion servings of cereal and snacks — more than half of which are breakfasts — to needy children and families around the world by 2017.