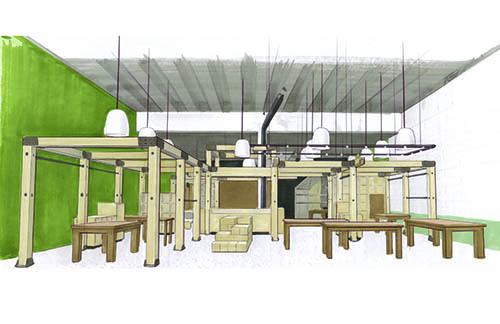 If Willys Detroit and Shinola are sister stores, then they come from a family that knows how to have a good time. Located on the 400 block of Canfield Street in Midtown, the stores will be hosting two parties this month, starting with Willys’ grand opening on June 14 and an first year anniversary for Shinola starting June 20.

“(The grand opening) is just a way for people to see Willys and experience the brands,” says Daniel Caudill, creative director of Shinola. “Visually, it’s going to be a really cool store with a lot of different sections of discovery. It gives us the opportunity to showcase other American brands the way they would showcase them.”

Willys Detroit will be anchored by four classic American brands: Filson, an outdoor goods brand from Seattle; Steven Alan, a heritage clothing line from New York; Clare V, a maker of handbags and accessories from Los Angeles; and Mollusk, a surf wear company based in Venice Beach and San Francisco, Caudill says.

In addition, a number of Michigan brands will be featured at the store, including Abigail Murray (home/kitchen goods from Ann Arbor), Debbie Carlos (home goods from Lansing), Detroit Rose Candles, Kate Tremel Clay (ceramics from Ann Arbor), Kerosene Fragrances (candles from Detroit), Lost and Found Vintage (Royal Oak), Rebecca Grubba (pillows from Oak Park), and SMPLFD (apparel from Detroit). The store, which will be open daily starting June 14, will evolve monthly to feature new brands from around the country.

During the grand opening, the Detroit Pop Shop will provide a selection of gourmet frozen treats — flavors include cucumber mojito, watermelon basil, and chocolate peanut butter malt. Drought will also be on site to celebrate its own grand opening within the Willys space, providing complimentary bottled water in its signature juice jars throughout the day. The organic, cold-press raw juice store is making the move from its present location within the Shinola store, Caudill says.

“They will have more of a dedicated lounge space, so it works better for them in terms of the layout,” he says. Once the move is complete, their vacancy in Shinola will be replaced with a small coffee bar featuring local roasters and baked goods from nearby Avalon International Breads./p>

On June 20, Shinola will celebrate its one-year anniversary with a Block Party, which will kick off with the opening of a dog park at Cass and Canfield at 10 a.m., followed by pet adoptions through the Michigan Humane Society from 4-7 p.m. That evening, Shinola will preview its new pet accessories line involving special promotions and activities from participating retailers in Midtown.

So which came first, the dog park or the pet accessories line? “The fact that we all had dogs came first,” says Caudill, adding that the addition of leather collars and related items was a natural extension for the Shinola brand, which recently launched a leather factory inside the College for Creative Studies. Combine that with the recent Green Alley project connecting Willis and Canfield streets, and the dog park just made sense.

“I have several friends that live in the neighborhood, and with all of the different things happening, the thing that they’re most excited about is the dog park,” Caudill says.