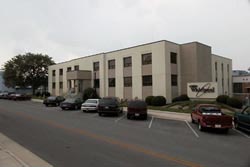 Benton Harbor-based Whirlpool Corp. is moving production of its commercial front-load washing machines from Monterrey, Mexico, to Clyde, Ohio. In recent years, the appliance manufacturer has moved more of its production operations to the United States to better serve local markets and reduce shipping costs.

“We continue to invest in advanced manufacturing processes in our Clyde plant where we have a highly skilled workforce, making this a smart, long-term business decision for us,” says Jeff Durham, Whirlpool’s vice president of U.S. manufacturing. “We look forward to ramping up production.”

Approximately 80 to 100 jobs will be created in Clyde during the next three years to support the relocation, which will increase operational efficiencies and align with the company’s strategy of building products in the regions where they are primarily sold. The front-load commercial washing machines, for instance, are primarily sold in the U.S., with approximately 10 percent exported to Europe, Australia, Latin America, and Asia.

Whirlpool — which reported annual sales of approximately $18 billion in 2012 — expects to maintain its employment levels at the Mexico facility, where it is adding a new residential washer production line to serve the Mexico market.

Production of the font-load commercial washer platform is due to begin in the U.S. in April.