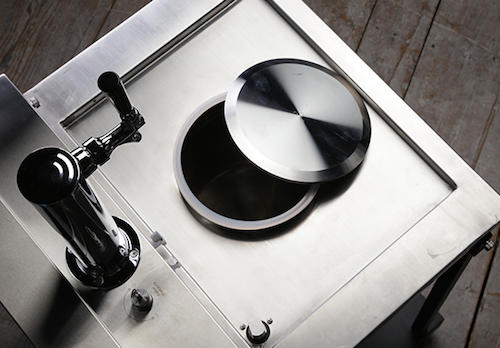 Benton Harbor-based Whirlpool Corp. has launched the Vessi Beer Fermentor and Dispensor, a system for home brewers that can ferment, carbonate, and dispense home-brewed beer in seven days.

W Labs — a division of Whirlpool that creates appliances — designed the Vessi fermentor as a pressure and temperature controlled system that enables home-brewers to ferment and serve beer straight from the tap in days rather than weeks.

“The traditional fermentation and carbonation stages for home-brewers can be tedious, cumbersome, and require many steps in order to get the perfect brew,” says Noel Dolan, senior manager of open innovation and strategic partnerships at Whirlpool. “We knew there had to be a better way. At W Labs, we’ve been researching, testing, designing, and rethinking the entire beer brewing process, and what’s resulted from that is the Vessi system.”

The fermentor includes a single tank system that’s sealed, pressurized, and temperature-controlled to craft beer. Dolan says with its single tank design, the system allows users to reduce risks in the home-brewing process, such as contamination, oxidation, and imperfect temperatures.

He also says rather than the multi-step carbonation process that is typical of home-brewing systems, the Vessi system also retains the beer’s carbonization throughout the fermentation process.

To learn more about the Vessi Beer Fermentor and Dispensor, visit igg.me/at/VESSIFERMENTOR.