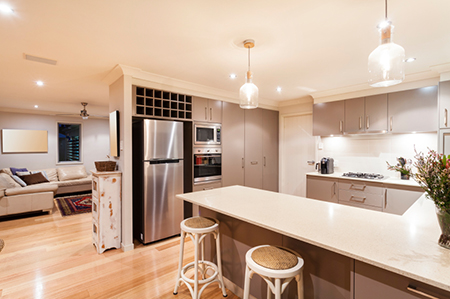 Survey results released today by Benton Harbor-based Whirlpool Corp. show that consumers are more interested in practical home appliance technologies that save time over novelty products such as refrigerators equipped with television screens.

“We’re at an exciting intersection in home appliance design,” says Brett Dibkey, vice president of integrated business units at Whirlpool Corp. “Consumers want technology that is both seamless and substantive and that means applying smart, thoughtful design to our home appliances from the inside out.”

Specifically, Whirlpool officials found that consumers tend to prefer appliance features that make cleaning easier. Nearly 40 percent of survey respondents want cooktops that don’t stain, 38 percent want washing machine that dispenses detergent based on the dirtiness of clothing, and 33 percent are looking for ranges that are easy to clean.

Not surprisingly, the survey also found that 83 percent of respondents would like to spend more quality time with their families. However, nearly half of homeowners said doing daily chores cuts into that time. (On average, consumers spend up to 11 hours each week preparing meals, washing clothes, and doing dishes.)

“Advanced sensor technology and connectivity allows consumers to perform daily tasks like laundry and washing dishes more efficiently,” Dibkey says. “Smart product design allows them to do so at the touch of a button. It’s really about creating appliances that will allow consumers to get back to doing what matters most — spending time with family and friends.”

Looking toward the future, 50 percent of homeowners say they want the ability to pull up recipes from an inset countertop display, 47 percent would like to see dry cleaning technology in the home, and 46 percent are interested in appliances that fold clothes.