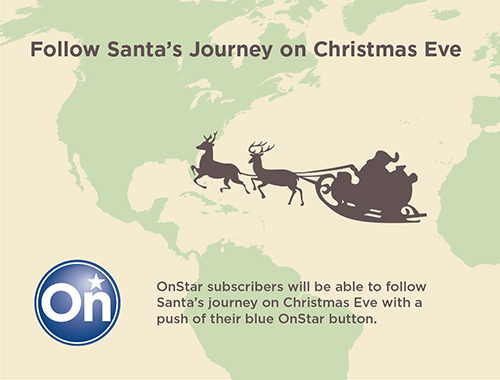 For the fifth consecutive year, families traveling in General Motors’ vehicles with OnStar services will be able to learn Santa’s whereabouts in the U.S., Canada, and now in Mexico starting Christmas Eve.

“Track Santa” — which begins at 7 a.m. Tuesday and continues until 5 a.m. Wednesday — will allow anyone with an active OnStar subscription to request a “Santa Update.”

“Our advisers really get into the holiday spirit when responding to these calls,” says Terry Inch, COO of Detroit-based OnStar. “They put on their Santa hats and elf ears and wholeheartedly take advantage of the opportunity to spread such joy to the children.”

Inch says the company’s first priority is the safety and security of its subscribers. “But we make adjustments in staff so that we are able to respond to the Santa calls as well as our day-to-day calls for assistance,” he says.