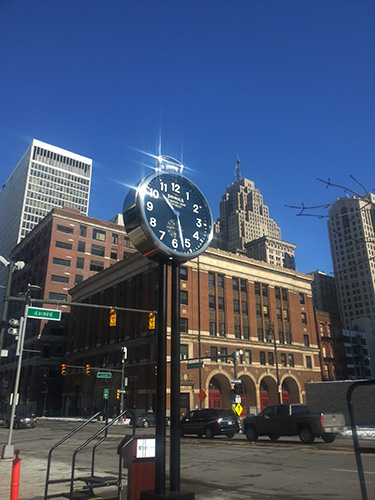 Local watchmaker Shinola installed four city clocks throughout Detroit on Thursday and today as part of gifts to Cobo Center, Eastern Market, Midtown, and the College for Creative Studies.

“Since we began our journey in the great city, we have been overwhelmed with the enthusiasm and support shown by the Detroit community,” said Steve Bock, CEO of Shinola. “We feel privileged to have the city clocks among some of the most notable places in Detroit, and hope they are enjoyed by all.”

Created in the style of Shinola’s future pocket watch design, each clock was manufactured by Electric Time Co., an 80-year-old specialty city clockmaker in Massachusetts, and features LED lighting and stainless steel casing.

The Cobo Center clock, installed at the corner of Washington and Larned, will be moved to the newly developed Cobo Square this fall, while the wall-mounted clock in Eastern Market’s Shed 3 will eventually relocate to Shed 5 once renovations are complete.

Midtown’s clock is at the site of a future dog park, at Cass and West Canfield, and a pole-mounted clock stands at the corner of West Milwaukee and Cass, adjacent to the A. Alfred Taubman Center for Design Education at the College for Creative Studies, where Shinola has its offices and assembly operation.

Later this year, Shinola plans to introduce the second in a line of limited-edition watches under its Great American Series — a pocket watch honoring automotive pioneer Henry Ford (limited to 1,000 units). Last December, the watchmaker unveiled the first watch in the collection, the Wright Brothers Limited Edition Watch, each priced at $1,000. It is assembled from 50 Swiss-made components set in a stainless steel cushion case and complemented by a sapphire crystal and a Horween leather strap.

Like everything it produces, Shinola attempts to source as many American-made parts and components as possible, while encouraging other U.S. companies to follow their lead.