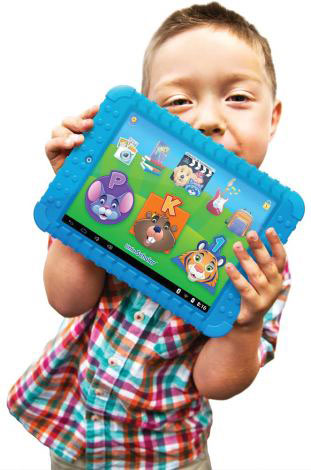 School Zone, an educational publishing and software company in Grand Haven, has released a tablet focused on preparing children for preschool through first grade. The device will be sold exclusively at Toys R Us.

“Kids today want their own tablet,” says Jonathan Hoffman, president and CEO of School Zone. “They’re really vertical with children between the ages of 3 and 7.”

While an iPad may be appropriate for someone over 8 years old, Hoffman says the Little Scholar, priced at $200, offers a more affordable option, especially for parents concerned about children inadvertently accessing unapproved content on the Internet.

The device comes preloaded with more than 200 educational applications, songs, and eBooks, all created by School Zone and its educational developers in Michigan. It also features seven, 22-minute episodes of a new live-action and animated children’s video series called, Charlie and Co. The show includes original music from Vander Ark, front man of the acclaimed band, The Verve Pipe.

For parents, the tablet includes an app that allows them to track their child’s progress and can see how much time their child has spent on each topic or curriculum area.

Hoffman says the tablet was three years in the making, and is the improved version of a Little Scholar released last December as part of a test run.

“We’re a publishing company, so we did a pilot run to learn what we didn’t know,” Hoffman says. “Then we tuned and tweaked it, fixing things (such as a bad speaker), and then we did a soft launch and put it to market.”

The company had the good fortune of the product falling into the hands of a buyer for Toys R Us, which signed on to exclusively launch the improved tablet. The unit is now sold through the company’s nearly 600 stores in the United States.

Looking ahead, School Zone will unveil the tablet’s next edition at CES in January. But don’t expect too many changes to the actual technology, which Hoffman describes as the “cream of the crop.” Instead, the company will focus on further developing new material, including six new episodes of Charlie and Co.

“We feel that focusing on the content is our most important contribution to parents,” Hoffman says. “The tablet is just a vessel for us.”