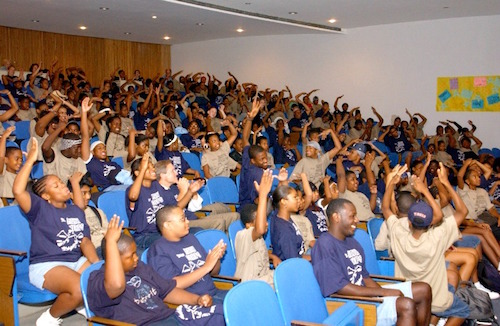 Detroit-based Wayne State University’s Math Corps has received a nearly $3 million grant from the National Science Foundation to develop and study the replication of its mathematics enrichment and mentoring program, which operates during summers and on Saturdays.

The four-year NSF grant project will analyze the reasons for Math Corps’ success with youth learning in Detroit as well as the processes of replicating the program in Cleveland; Utica, New York; and Philadelphia.

The project will also conduct an evaluation of the program’s success on both near and long-term youth outcomes.

“This award will position us for a national expansion,” says Steve Kahn, co-founder of Math Corps, director of the WSU Center for Excellence and Equity in Mathematics, and principal investigator for the NSF project. “We will document the philosophies, principles, and practices in a way that can be easily shared with people across the country, whether it be programs or schools.”

Stephen Chrisomalis, an associate professor and graduate director of the university’s Department of Anthropology in the College of Liberal Arts and Sciences, is one of the project’s co-principal investigators.

Over the next four years, Chrisomalis, who has been involved with Math Corps since 2008, will help conduct anthropological and linguistic research including surveys, audio recordings, student journals, pre and post-tests, discourse analyses, and interviews with staff and students at the original Math Corps and the three new sites.

Founded in 1992, Wayne State’s Math Corps is a six-week, tuition-free academic enrichment and mentoring program that brings middle school, high school, and college students together with mathematicians to share in the teaching and learning of mathematics in a university setting. The program serves 400 students on the university’s Detroit campus.