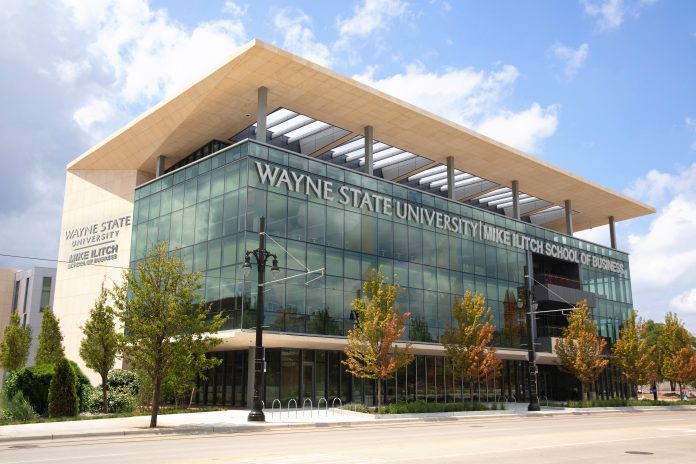 Wayne State University in Detroit Tuesday celebrated the opening of the Mike Ilitch School of Business. The school was made possible by a $40 million gift from Little Caesars Pizza founders Mike and Marian Ilitch, which was the largest in WSU’s history.

“Watching our new home advance from inception to reality has been one of the most rewarding moments of my career,” says Bob Forsythe, dean of the Mike Ilitch School of Business. “Mike and Marian Ilitch’s historic donation has made way for our best and brightest students to thrive more than ever before. We are forever thankful for the philanthropy provided to our academic community.”

As part of the project, new curriculum was developed at the business school, including new programs in sport and entertainment management, as well as entrepreneurship and innovation.

Its 260-seat Lear Auditorium is equipped with audio video technology and the ability to accommodate full-sized vehicles for the university’s automotive partners. There is also a street-level finance and data analytics lab with a Wall Street-style LED stock ticker and interactive display wall, along with Bloomberg terminals and databases.

“Mike and I were so proud to make the gift to build this school. It was one of the highlights of our careers,” says Marian Ilitch. “We were so excited about the positive impact it will have on the students, the university, the city of Detroit, and our broader community, for generations to come.”

The business school, located at the southwest corner of Woodward Avenue and Temple Street, is just north of Little Caesars Arena. Students will also be near Comerica Park and Ford Field.

“The opening of the Mike Ilitch School of Business is one of many recent developments that reinforces Wayne State University as a leader in urban education, the state of Michigan, and beyond,” says M. Roy Wilson, president of WSU. “We appreciate the incredible investment Mike and Marian Ilitch have made in our university and in our students.”

“In my business career and throughout my (two) term(s) as governor, I’ve recognized the importance of fostering our next generation of talent by providing opportunities for education that meet the needs of students and their future employers,” says Snyder. “This remarkable donation from Mike and Marian Ilitch will support Wayne State’s business students while fueling local and statewide economic growth in meaningful ways for decades.”

To date, the Ilitch organization has invested $1.4 billion in office, retail, and other commercial developments in The District Detroit, a 50-block area that includes the three stadiums, the Fox Theatre, and the upcoming $150-million, nine-story headquarters for Little Caesars Pizza located just south of the Fox Theatre and Office Building. The new structure will offer 235,000 square feet of space for around 700 employees, along with a skywalk that connects to the Fox Office Building.

Joining the headquarters will be Columbia Street, a European-style street that will offer nearly 40,000 square feet of new ground-floor commercial space and be outfitted with cobblestone paving, festoon lights, and al fresco dining space. Columbia Street is located between Woodward and Park avenues, with stores and restaurants set in the new headquarters and the Fox Theatre.

In addition, The Detroit Medical Center and Olympia Development recently announced a long-term agreement to build a state-of-the-art facility along Woodward, immediately north of Little Caesars Arena. Under the deal, the DMC will lease a portion of the building to operate a sports medicine facility. Construction is expected to begin next year. The project includes an investment of more than $65 million, and is scheduled to open in 2020.

“The resurgence our city is experiencing today is opening up incredible business opportunities, and it’s critical that we develop the next generation of talent to take advantage of them,” says Detroit Mayor Mike Duggan. “Thanks to this gift from Mike and Marian Ilitch, we now have a world-class facility that will help support and sustain our economic growth by preparing our future business leaders.”

The Ilitches founded Little Caesars in 1959, growing the company from a single storefront in Garden City to the world’s largest carryout pizza chain. In July 2014, they gave $8.5 million to WSU’s School of Medicine.

Classes will begin in the new business school on Aug. 29. WSU offers more than 380 academic programs and has more than 27,000 students.