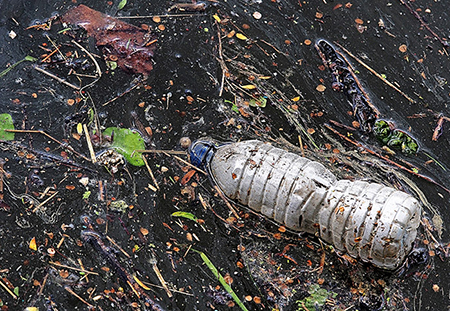 Researchers at Wayne State University in Detroit have been awarded a three-year $929,000 grant to develop technology designed to zero in on microplastic sources and accelerate an outreach and mitigation campaign, the school announced Friday.

Plastics never decompose, but they break down into much smaller components called microplastics.

The bi-products are no less environmentally hazardous that larger plastic objects and create problems for ecological and human health as they enter water supplies and marine environments. Reducing microplastic pollution is one of the top priorities of environmental organizations, including the Great Lakes Protection Fund, which awarded the grant.

About 10,000 metric tons of plastic enter the Great Lakes every year, and another 8 million metric tons go into the ocean.

Yongli Zhang, assistant professor of civil and environmental engineering at WSU, is leading the project. “The issue of plastic pollution — and more specifically microplastic pollution — is beginning to get more attention,” says Zhang. “However, this is still a relatively new issue for most people, and a great deal of outreach is still needed to make positive changes to public awareness and engagement.”

Microplastics are often remnants from larger plastic items. One water bottle can break into more than 10,000 pieces. They also come from products that contain microbeads, such as soap, toothpaste, and textile fibers in laundry wastewater. Because of their tiny size – smaller than 5 millimeters – they easily enter food systems, often without detection.

They act as toxic sponges, absorbing large amounts of persistent organic pollutants, which can lead to serious illnesses and interact with microbiota such as bacteria and fungi, which play key roles in our ecosystems.

Zhang’s team has developed an Internet of Things (IoT) technology that incorporates optical sensors, machine learning, and edge computer (distributed computing paradigm) to allow for more cost-efficient and timely monitoring and sourcing of microplastic pollution. The team hopes the public will better understand the problem, and provide for behavioral changes.

“By integrating the IoT technology with machine learning tools, the sensors will provide abundant critical information for microplastic monitoring, including the quantity, size, chemical composition and age, as well as the correlation to the location and weather conditions,” says Weisong Shi, a professor of computer science at WSU.

The researchers will deploy sensors at testing sites in Williamston, which is just outside of Lansing, and Pontiac. They will monitor microplastic inputs from sources including wastewater discharge, urban runoff, and agricultural zones.