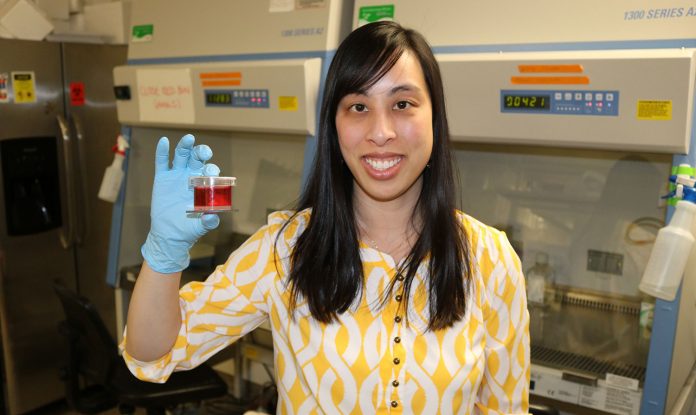 Wayne State University in Detroit today announced that it has researched whether a collagen-based hydrogel can be used to reinforce tissue-engineered blood vessels seeded with human fibroblast cells.

“Tissue engineering blood vessels is an important endeavor for clinical care due to the limited availability of autologous replacement vessels,” says Mai Lam, assistant professor of biomedical engineering and one of the leaders of the research team at Wayne State.

The tunicae, or walls, of blood vessels are made of three layers: an inner (intima), middle (media), and outer (adventitia) layer. Lam’s team specifically looked at the tunica adventitia because of its crucial role as structural support to prevent rupture under high pressure.

“In surgery, during endarterectomies, surgeons can strip the vessel of all the intima and most of the media, leaving the adventitia as the main strength layer to hold suture and close the vessel,” according to the team’s research paper, which was published in Scientific Reports in February 2018. “It is well known that the collagen content in the vessel wall is the main strength of the blood vessels.”

While previous vascular grafts using fibroblast cells have required a significant maturation period to reach full strength, Lam’s team found a new method, in which it assembled rings of vascular tissue around a center post to create a tubular structure to formulate fibroblast stacks. The rings were then supplemented with collagen gel, and the team also added other factors such as ascorbic acid to stimulate additional collagen production.

The group found an optimal combination for tensile strength and fiber maturity in less time than most prior research. Subsequent studies will focus on methods to achieve a level of strength closer to that of native adventitia as well as an improved immune response.

“For the millions of patients undergoing bypass surgery annually, limited availability of patient vessels for self-donation is the greatest issue,” says Lam. “With further development, engineered vessels such as these could fill this need and be used as viable grafts.”

Collagen is the most abundant protein in our bodies and is found in our muscles, bones, skin, blood vessels, digestive systems, and tendons. It is also used in a range of products including cosmetics and vitamin supplements. Its strength, elasticity, availability, and biocompatibility make collagen useful in biomaterials and regenerative medicine applications.