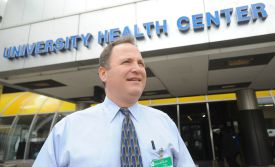 Wayne State University announced today it received a nearly $5 million, five-year grant to lead an international study to provide dosage information for clinicians who use polymoxin B, an antibiotic used for patients with infections such as pneumonia or meningitis when no other treatments are effective.

“It’s critical to have these dosing guides to assure that this agent of last resort is preserved and that these superbugs do not become resistant to it,” says Dr. Keith Kaye, professor of infectious diseases at Wayne State and the leader of the study. “These guides will aid in minimizing unnecessary toxic side effects of the drug.”

Kaye says there’s no clear definition of how to dose polymyxin B optimally. Since its release in the 1950s, antibiotic resistance to polymoxin B has grown. The antibiotic is used as a last resort for patients who have been infected with gram-negative bacteria that causes bloodstream, wound, or surgical site infections. Kaye says life-threatening infections caused by the Gram-negative superbugs that become resistant to polymyxin B are practically untreatable.

The research team, which is made up of researchers and doctors from the DMC Sinai-Grace Hospital, Monash University in Australia, and the University of North Carolina, will focus on defining the optimal dosage regimens in critically ill patients.

The grant for the research was from the National Institutes of Health.