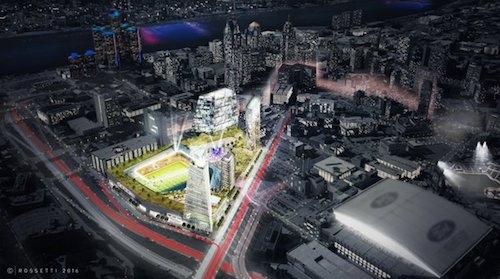 Wayne County Executive Warren C. Evans today provided an update on the status of the two proposals to address the County’s unfinished jail project. On June 28th, the County received proposals from Walsh Construction to finish building the jail on the Gratiot site and from Rock Ventures to build the County a new criminal justice center on an alternative site.

“While both proposals remain options, I’ve directed my team to dedicate their time and resources toward attempting to reach a contract with Rock Ventures,” says Evans. “The Rock Ventures proposal has more upside, less risk, and a smaller financial gap than Walsh Construction’s proposal. There are, however, many issues to resolve with Rock Ventures before I could recommend the approval of a contract to the County Commission and the County Building Authority.”

In the coming weeks, Executive Evans’ team will work with Rock Ventures’ representatives to negotiate terms of a deal to create a new criminal justice center.  If negotiations with Rock cannot result in a contract in the best interest of County residents and taxpayers, the County Executive has 120 days from June 28th, the date Walsh submitted its proposal, to commence negotiations to complete the jail at the Gratiot site.

Analysis of the Walsh proposal raises concerns it would likely cost as much if not more to finish the Gratiot jail and renovate the Frank Murphy Hall of Justice than the County’s contribution to the Rock Ventures-proposed criminal justice center. The total likely cost, combined with the Walsh proposal putting the County at risk for cost overruns unlike the Rock proposal, factored heavily in the decision to focus on Rock’s proposal.

Walsh Construction’s proposal includes two jail options at Gratiot, with approximately 1,608 beds at $269 million and 2,200 beds at the cost of $317.6 million, which does not include the cost of renovating the Frank Murphy Hall of Justice, which is estimated to cost $36 million. The total cost of the Walsh proposal with the renovations to Frank Murphy is estimated to be about $353 million.

Rock Ventures’ proposal offers to build the County a new criminal justice center with a 2,280-bed jail, criminal courthouse, prosecutor offices, sheriff administrative offices, and a juvenile detention facility at a total approximate cost of $520.3 million with the County responsible for $380 million plus the cost of acquiring land from the City of Detroit bounded by the I-75 Service Drive, E. Warren Ave., E. Ferry, Russell and Frederick. Rock Ventures would bear the responsibility and risk for all cost overruns.

Both proposals provide for increased bed capacity to allow the closing of the Division III jail, as well as Divisions I and II. The increased capacity from 1,600 to 2,200 or 2,280 beds costs between $55 million to $60 million for either project.

The annual operational savings to the County from an expanded jail will more than offset the additional capital costs in constructing a larger jail. A study performed by CGL, the County’s consultant, estimates an annual savings of $7.2 million a year by closing Division III. The analysis includes the initial capital costs of building the larger jail.

“Based on where we are today and looking to the future, it makes sense for the County to spend the additional money for the expanded jail,” Evans says. “The County’s improved finances and credit rating have given us the option of financing the larger project in order to achieve this long-term benefit.”

Rock Ventures’ proposal contemplates building the criminal justice center on a site currently owned by the City of Detroit. The County will continue to work toward an agreement with the City of Detroit for purchase of the land as it also awaits an IRS determination on a closing agreement which provides for the use of the jail bonds at a site other than Gratiot, and specifically, Rock Ventures’ proposed site.

Either of these issues could present obstacles to finalizing a contract with Rock Ventures. In addition to approving a definitive agreement with Rock Ventures to build the criminal justice center, the Wayne County Commission would need to approve the purchase of the City of Detroit’s property, and the County Building Authority would need to approve the closing agreement with the IRS for resolution of the use of the jail bonds.

“Over the past few weeks we’ve made progress with both Rock Ventures and the City of Detroit and we’ll continue those efforts,” Evans says. “Having a new criminal justice center is the better option, but there remain significant obstacles that need to be resolved.  We will continue to work tirelessly to address them.”

Matt Cullen, a principal of Rock Ventures, issued the following statement today: “On behalf of Rock Ventures, I’d like to thank Warren Evans and his dedicated team for their hard work throughout this process and their confidence in us moving forward together. We are more confident than ever that this project represents a great opportunity for Wayne County, its residents, and our entire community. We remain committed to working together to make the vision of a new criminal justice complex and mixed-use gateway project become reality.”