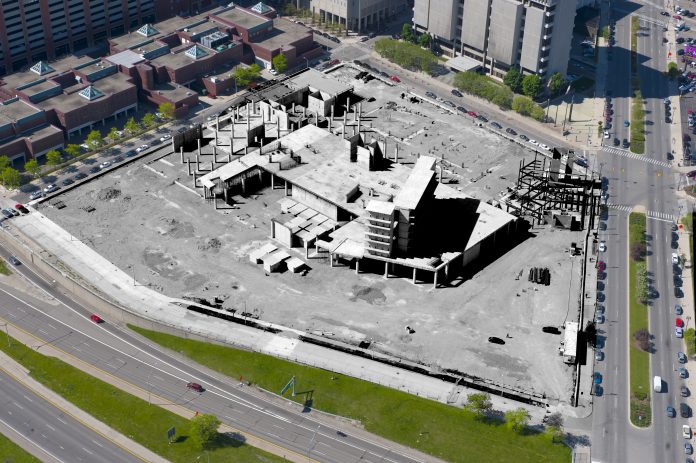 Rock Ventures, a real estate company owned by Dan Gilbert, founder and chairman of Quicken Loans Inc. in Detroit, plans to soon begin demolishing the “failed jail” site it recently acquired from Wayne County at I-375 and Gratiot Avenue in downtown Detroit. The plan is to complete the demolition this summer.

In its place, Rock Ventures plans to develop a mixed-use development valued at up to $1 billion. The site, which was included in a bid to lure Amazon’s second headquarters that was passed on, now offers around 13 acres of space for Rock Ventures.

On Thursday, the Wayne County Commission voted to approve the sale of four neighboring parcels — Frank Murphy Hall of Justice, Division I and II jails, and the Juvenile Detention Facility — to Rock Ventures. Under the deal, the County would lease the four buildings for $1 until employees and prisoners make the transition to a $533 million criminal justice complex at East Warren Avenue and I-75.

That project will be completed in 2022. The county will invest $380 million in the new jail complex and Rock Venture will cover the rest, including any cost overruns on the $533-million project.

“This has been coming a long time, and we want to get in the new facility as quickly as possible because we will realize the savings that much quicker, and we can realize a new tax base at the old jail site and the neighboring buildings,” says Khalil Rahal,” assistant Wayne County executive. “The beauty of the contract is that it says Rock Ventures has to build a ‘first class mixed-use development’ at the old jail site and the other four properties.”

Rahal added that as part of the deal, the County and the city of Detroit will work together to market the former AMC headquarters on Detroit’s west side that has been vacant for several years. The Wayne County Land Bank Authority had owned it. The AMC site, which is 50 acres to 60 acres in size when combined with neighboring land owned by Detroit, includes a rail line.

As part of the new jail site, the city provided land for the project and received the AMC site in return. “We think the AMC project will be a good corporate or industrial development,” Rahal says. “In addition, in the overall deal, Rock Ventures will provide $500,000 to assist with rebuilding neighborhood parks and $250,000 to support an initiative we’re exploring for a returning citizens program. Companies we hear from say that returning citizens to the County are some of their best workers.”

He adds that the new jail site, once operational, will have around 1,500 people visiting every weekday, made up of “judges, prosecutors, attorneys, jurors, and family members. Just like the current justice and jail facilities helped support Greektown and other restaurants and businesses, the area around the new jail complex will support those businesses.”

Matt Cullen, principal of Rock Ventures, said the company was appreciative of Wayne County’s leadership in consummating what was a complicated deal. “After five years of working to solve a complex set of challenges, (Thursday’s) vote is a great example of how the public and private sectors can work together to create a great outcome for taxpayers and the region,” said Cullen, who led negotiations on the deal, in a written statement. “Now we can get to work on creating a new development fitting for the gateway to Detroit.”

In addition to the failed jail site and the four neighboring buildings, Rock Ventures plans to renovate the former Detroit Police headquarters at Macomb and Beaubien streets that was built in 1923. The U-shaped, eight-story building designed by famed architect Albert Kahn will likely be converted into a hotel.

The Police Department, along with the Detroit Fire Department, moved to a new justice facility at Bagley Avenue and Third Street in 2013. It was formerly the temporary MGM Grand Detroit, and prior to that, an IRS office facility.

“The two-notch upgrade reflects our view of the county’s continued maintenance of structurally balanced operations, and that it is well positioned to be able to maintain structural balance even as operating and fixed costs are set to grow in the near term,” said S&P Global Ratings credit analyst John Sauter.