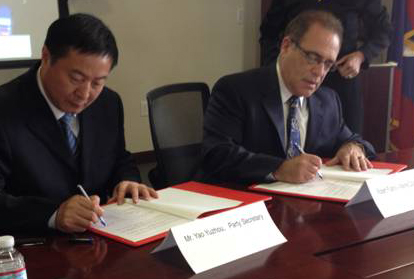 Representatives from the municipalities of Wayne County and Xuancheng, a Chinese city east of Shanghai, signed a non-binding agreement Tuesday that promotes economic growth and trade between the two entities.

“It is anticipated that Chinese automotive manufacturers are likely to spend billions in the future as their industry extends its global reach,” says Wayne County Executive Robert Ficano, who signed the agreement with Yuzhou Yao, party secretary of the CPC Xuancheng Municipal Committee. “We want our manufacturers and suppliers here in Wayne County and in the region to be part of the growth and believe the (agreement) with the Xuancheng municipal government is a step toward reaching the goal.”

Per the arrangement, Wayne County and Xuancheng will encourage and promote each other’s enterprises, with the goal of furthering trade cooperation on the basis of mutual benefit and reciprocity and boosting strategic cooperation between the parties.

“We believe this cooperative agreement continues Wayne County’s long mission of creating jobs through direct foreign investment,” says Ficano, whose first trade mission to China was in 2005.  “I commend all who were involved in making the MOU between Wayne County and the Xuancheng Municipal Government a reality.”