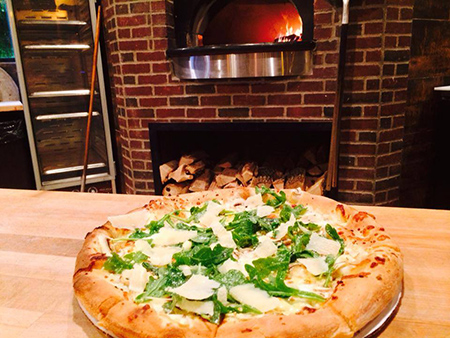 When Mario Randazzo returned home two years ago from a culinary internship program in Italy, he knew exactly the approach he would take to cultivate his first business, a wood-fired pizzeria in Washington Township.

“Everything in this restaurant is made the way I did it in Italy,” says Randazzo, owner of Pizza Nostalgia, at 57889 Van Dyke Rd. “There’s no freezers, no microwaves. I get deliveries every other day, if not daily. You can really taste the freshness inside all of the food.”

The 64-seat eatery has been so successful, Randazzo is now in search of a second location that he hopes to open by late 2015. “It could be in Troy or Sterling Heights. I’ve also looked in Detroit and St. Clair Shores. It’s a pretty wide range, but I want to stay in the (metro Detroit) area.”

He says when the second restaurant opens, customers can expect a similar menu with comparable price points — the average pizza runs for anywhere from $8 to $23 — and Randazzo says he will be adding several sandwiches to the menu.

Pizzas ranges from small (8 inches) to large (16 inches), with the most popular being The 26.2 Runner, featuring roasted garlic oil, mozzarella, feta, onions, black olives, red peppers, and spinach.  “It’s named for my mom, who is a runner, and this is her absolute favorite. I have a really big family — four sisters and one brother — so a lot of the names on the menu have something to do with them.”

As far as the name Pizza Nostalgia, Randazzo explains that it’s based on the perspective he gained while studying in Rome. “Going to a pizzeria there is a true experience — it’s not like ordering carryout from a chain on a Friday night. And a lot of those franchises focus on making everything bigger, faster, cheaper. So I said, instead of doing that, instead of making something new, I want to make it old — I want to make a quality product the way it used to be made.”

Randazzo says he would like open a retail component to his Washington Township location, where customers can buy house-made dressings and sauces.