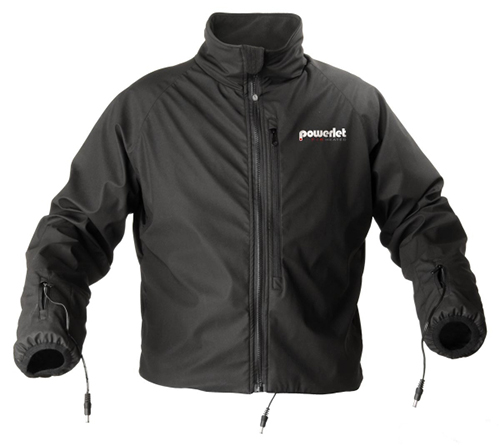 “When you’re riding on a motorcycle, you can imagine that the conditions are a bit more extreme. You’re dealing with winds that are sometimes in excess of 60 to 70 miles an hour,” says Adam Bonislawski, sales director at Coliant, which has two offices at the Macomb-OU INCubator in Sterling Heights. “(Our heated apparel) incorporates a different type of technology that provides a infrared heat rather than a conductive heat, so it’s more penetrating and immediate to the wearer.”

Harley Davidson has signed on for heated jacket and glove liners as well as a wireless controlling mechanism that allows riders to adjust the heat setting using an Apple or Android app on a wrist device, Bonislawski says. “We’ve made it easy. All of the garments interconnect to themselves, with only one connection point to the vehicle. The rider can effectively manage all of the pieces he’s wearing with the touch of a button,” he says.

While the apparel is currently designed to run off of a 12-volt battery — so it can also be used while driving an all-terrain vehicle, snowmobile, or car, provided there’s the appropriate connection solution — Coliant hopes to introduce garments with portable batteries within the next year or two, Bonislawski says.

Overall, Bonislawski expects the relationship between Coliant and Harley will allow the company to grow and increase its overall business model. “The OEM area is something we just started dabbling in over the last couple of years, and Harley Davidson is the most prestigious account we’re associated with. We’re hoping to build that relationship … (to) increase our volume exponentially,” he says.

Coliant, founded in 2005, employs 20 people. The company initially focused on developing rugged electrical accessories for motorcycle owners. Since then, the company has expanded its focus to numerous industries and is currently exploring different military applications, Bonislawski says.